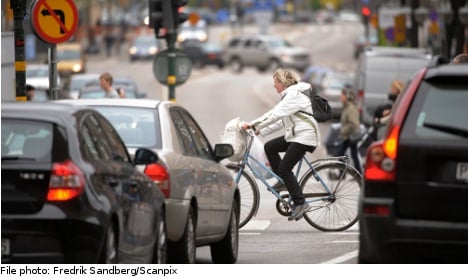 Four out of ten of the people seriously injured or killed in single-vehicle accidents involving a bike is aged over 65-years-old, according to data compiled by the Swedish National Road and Transport Research Institute (VTI).

Hip injuries are one of the most common types of injuries incurred when and these often occur at low speeds or when the elderly are getting on or off their bikes.

Researchers at the institute have thus come to the conclusion that it would be preferable if men switched to the traditional low-crossbar design of ladies’ bikes when they get older.

“The bike should not be designed as a standard bike, with a pole in the middle, for the men are not able to get over it,” VTI researcher Anna Niska said to the TT news agency.

The study covered the years 2007-2011 and found that there were 125 fatalities and 1,275 serious injuries involving single bicycles. Some 119 of the injuries occurred when mounting or dismounting.

Anna Niska underlined however that despite the risk of injury it is preferable from a health point of view that the elderly continued to get out and about on their bikes.

“Some may want to conclude that now we shouldn’t let the elderly use bikes, but it is a question of getting around and getting some exercise,” she said.