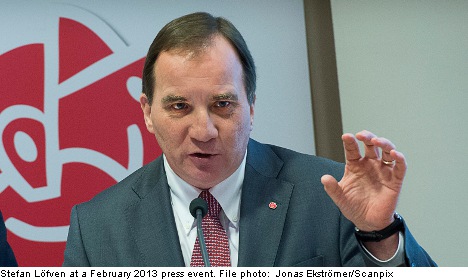 The March Ipsos poll, published by newspaper Dagens Nyheter (DN) on Monday, showed that 34.6 percent of Swedes would vote for the Social Democrats were general elections to be held today.

The timing of the results is fortunate for Social Democrat party leader Stefan Löfven, who is due to address the party congress opening on Wednesday in Gothenburg.

Löfven was appointed Social Democrat leader by the party board in January 2012 but it is only now, over a year later, that he will receive the official endorsement at the congress.

“Compared to January, support [for the Social Democrats] is growing among men aged 45 and up and in the three big cities,” said Johanna Laurin Gulled, opinion analyst at Ipsos.

“That is also the case if you look just at Stockholm,” she added.

The ruling Moderate Party came in at 28 percent in the Ipsos poll, while the Liberal Party (Folkpartiet) saw a slight improvement, landing at 5.6 percent.

The other governing Alliance coalition parties are having difficulties gaining enough support to reach the four percent threshold for taking parliament seats.

The Christian Democrats dropped by 0.2 percentage units on the last Ipsos poll and came in at precisely four percent. Support for the Centre Party remained at 3.8 percent.

Meanwhile, support for the right-wing Sweden Democrats dropped from 10.2 to 8.0 percent.

Together, the three opposition parties – the Social Democrats, the Left Party and the Green Party – received 49.4 percent, while the Alliance coalition received 41.4 percent.

Figures from Svensk väljaropinion also showed that support for the Social Democrats is growing while the government parties are losing voters. Out of all the parties, the Centre Party is doing the worst.

The Svensk väljaropinion index is a compilation of figures from several polling companies and the shifts noted there are not statistically secure.