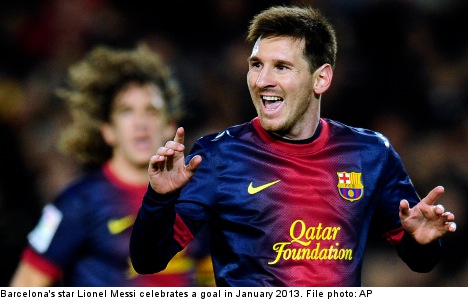 Paris Saint-Germain are confident they can upset the odds at the Parc des Princes here on Tuesday in their Champions League quarter-final first leg clash with red hot favourites Barcelona.

It is a long time since PSG made it this far in Europe’s top competition, and only a handful of their likely starting line-up in the game have experience of playing in the last eight of the Champions League.

Paris probably need to win the first leg at home in front of a sell-out 45,000 crowd if they are to stand any chance of winning the tie, although even that might not be enough, as AC Milan found out in the last 16.

The Serie A side won 2-0 in the first leg, before losing 4-0 in the return at the Camp Nou as Lionel Messi inspired Barcelona to a stunning comeback victory.

“It will be very difficult. We know they will have the ball, but we want to have possession too because we are at home.

“It is exciting to play this game and try to find a solution, so let’s just see what happens.”

Ibrahimovic, who, along with Thiago Silva, played for Milan when they lost to Barcelona in the quarter-finals last season, has scored 25 Ligue 1 goals this season as well as two in the Champions League.

He was set to miss this game after being handed a two-match ban following his sending-off in the first leg of the last-16 tie against Valencia, but was handed a reprieve last week when UEFA reduced the ban to a single game on appeal.

“This is a game that everyone wants to play in,” said the Swede.

“I respected the referee when I was sent off but the two-game ban was hard and to appeal it was absolutely the right thing to do.”

He will start in attack alongside Ezequiel Lavezzi, the Argentine who has scored five times in Europe this season, with Lucas Moura set to return on the right wing after injury.

With former Barcelona player Thiago Motta not in the squad, Marco Verratti will partner Blaise Matuidi in central midfield in a 4-4-2 formation as David Beckham starts the game on the bench.

Coach Carlo Ancelotti, who arrived at the helm just over a year ago, was optimistic when he spoke on the eve of the game.

“I have a good feeling,” said the Italian, who has won the European Cup both as a player and as a coach with AC Milan.

“Everyone knows the difficulty, but it will be a fantastic match. To be in the Champions League quarter-finals after just a year is very good and I want all the players to be happy to be here.

“It is maybe the hardest match we could have asked for, but I would like to see a courageous PSG, with personality.

“We might not have lots of possession, but we will have clear ideas to attack, score goals and win.”

Ancelotti is focusing fully on his team’s strengths rather than worrying about how to deal with the brilliance of Barcelona and Messi in particular.

“Messi is difficult to stop but so is Ibrahimovic,” he said.

“We are all concentrated on our game, so I haven’t thought too much about the quality of our opponents and their way of playing.”

Meanwhile, Ancelotti insisted that there is no truth in reports that Real Madrid coach Jose Mourinho had sent him advice on how to beat Barcelona, and joked he was running out of time to do so.

“If Mourinho wants to give me any information on Barcelona he can do because he has lots of experience of playing them, but I have still not received these videos and the game is tomorrow,” he said.