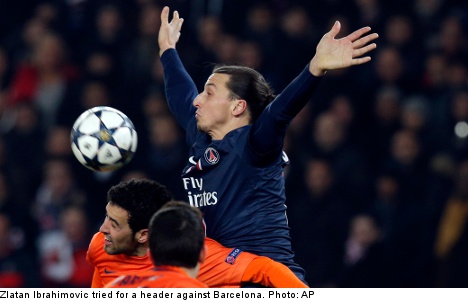 “It’s in these matches we can show the world that we should be at this level,” Ibrahimovic told broadcaster Viasat following the match.

Barcelona struck first in the 38th minute with Lionel Messi putting away a world-class set up by Daniel Alvez.

Messi left the match at the half with a reported thigh injury, giving the Paris side one less threat to worry about for the remainder of the match.

But the hometown crowd at Pari’s Parc des Princes stadium still had to wait until the 79th minute before Swedish striker Ibrahimovic, who spent one unhappy season with Barcelona, put PSG on the scoreboard.

The big Swede’s equalizer left Barcelona seething as he appeared to be offside when he put away the rebound after Thiago Silva’s header careened off the post.

“I just tried to go up for the rebound. The ball came out toward the middle and I made an arch and then the ball went in the net,” said Ibrahimovic, who simply smiled when asked if he was offside.

The evening’s drama ratcheted up a notch ten minutes later when Barcelona’s Xavi buried a penalty shot, and with it, the hopes of a draw for the Paris side.

But in extra time, PSG’s Blaise Matuidi acted as saviour for his club’s Champions League dreams, netting the equalizer in the 94th minute in what turned out to be the last kick of the game.

The two teams will square off next in Barcelona to determine which squad will advance to the semi-finals.