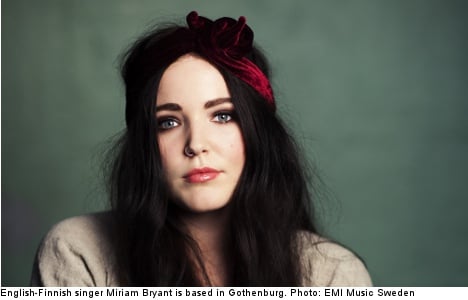 Sweden recently seems to have generated an almost obscene number of fantastic female-fronted electronica acts. Lune, Frida Sundemo and Kate Boy are the cream of the current electronica crop but there has been one artist who has generated much more Swedish media froth than these three put together – and she’s not even Swedish.

Miriam Bryant is a Gothenburg-based English-Finnish singer who, on the surface at least, has more in common with Adele’s British take on bluesy pop than Robyn’s precision-tooled electronic pop. Certainly the hype surrounding Bryant’s just-released debut album, Raised In Rain, has a whiff of the early excitement that greeted Adele five years ago.

The assured 22-year-old isn’t getting carried away, though. When I speak to her, she hasn’t just left a champagne-soaked after-party or interrupted a dinner party with new film star buddies.

“I’m in Stockholm and I’ve just done my laundry.”

When I ask her if she’s already getting bored of the interminable promo circus that’s required of any major album release she again laughs easily: “Haha, no. I’m enjoying it so far. It’s keeping me very busy but I still have time to get my washing done.”

Bryant, the daughter of an English father and a Finnish mother, seems happy with the comparisons to Adele.

“It can be annoying but people are comparing me to one of the world’s most talented singers so I take it as a compliment. Adele has an absolutely stunning voice. But at the end of the day we do have quite different sounds,” she says.

Bryant’s assertion is correct. Finders Keepers, the first single from Raised In Rain, bears a strong resemblance to Adele’s output – it’s a hearty, meaty pop-soul song with a big hook and emotion a-plenty.

But it’s also notable for Bryant’s slightly more versatile voice – she may not be able to boom it out a la Adele but she’s able to fleck her creamy voice with little bits of vocal grit. It’s a surprisingly effective tool and one that marks her out as a really accomplished singer.

Indeed, it’s such a captivating effect that you assume Bryant spent years perfecting her vocal technique. But no.

“When I was younger I the last thing I wanted to do was sing in front of people, and so never did it. I really did not like my singing voice,” she explains.

“But now I have come to a stage where I think I’m good. And it feels great.”

Although Bryant is not even a Swedish citizen, she insists her adopted country’s education system has played a major role in her development as an artist.

“Sweden is my home and it’s a great country to live in. The best things about Sweden is that it has a very big music scene and has a very wide range of different educations in terms of culture,” she says.

“You can do pretty much anything you like from a very early age. For example, I was in a choir school from the age of nine, and then in high school I chose a musical theatre profile.”

Which traits of the English and Finnish do you identify with?

“I really don’t know. I guess I’m very honest and straightforward. I’m also easy-going, but also I can be very loud. I love football and am a big England supporter. And I love people and beer. But I have a dark and melancholic side as well as a positive way of looking at life. I never say no to a nice cup of tea and I love a sauna bath once in a while.”

One final question – are you ready for fame?

April Album of the Month

So when I came across this, the debut album by Nord & Syd, a northern Swedish indie ‘supergroup’ formed by the, ahem, luminaries of various indie bands, my expectations were lower than the belly of a champion limbo-dancing snake.

Now ‘polished’ is not always a compliment. Too often it’s a synonym for bloodless. But Nord & Syd’s grasp of pop dynamics is so astonishingly firm, their ability to write whopping big tunes so well developed, that their ultra smooth edges are forgivable. Indeed songs such as Men åh and Inte idag have such memorable melodies that you instantly think you’ve heard them before (in Men åh’s case that may be true – the verse does bear an uncanny resemblance to Van Morrison’s Brown Eyed Girl). Oh, and don’t worry about the lyrics being in Swedish. Julia Hanberg’s voice is so crystal clear you can always count the album as a module of your SFI course.

April Gig of the Month

This year’s Open has another great line-up. From The Local favourites, Frida Sundemo and Faye, through to more established acts such as Mando Diao and Cult of Luna, this terrific little festival features some of the best contemporary Swedish music.

For more information visit the www.umeaopen.se.