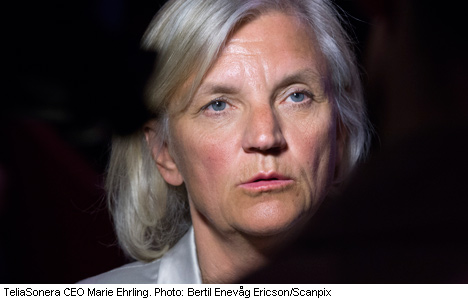 Ehrlin said she had ordered a review “country by country, transaction by transaction, and deal by deal”.

The company will bring in outside expertise to look at the material in a review that will be much greater in scale than the Uzbekistan inquiry performed by Swedish law firm Mannheimer Swartling, whose findings were presented in February.

The report prompted the resignation of then CEO Lars Nyberg and his board members. On Wednesday, the newly elected board members took over the reigns from an interim CEO, Per-Arne Blomquist. He said that the company had taken the Mannheimer Swartling critique on board.

“We shouldn’t have set up in Uzbekistan in the manner that we did,” he told the TT news agency.

It claimed that TeliaSonera in 2007 paid a bribe worth 2.2 billion kronor ($337 million) to company Takilant for 3G mobile telephone licences and frequencies in Uzbekistan, as well as a 26-percent stake in the Uzbek company Ucell. Takilant has ties to Gulnara Karimova, the daughter of Uzbek President Islam Karimov.

Shortly after the allegations came to light, then CEO Nyberg promised he would resign if the bribery allegations proved true. While the Mannheimer Swartling report in the end found no direct evidence that criminal acts had taken place, it proved enough to prompt Nyberg’s resignation.

“TeliaSonera must get to the bottom of the accusations levelled at the company, and that requires bringing in outside experts, ” he told TT.

Thedén voted for immunity for the former board members, including the then CEO. The move caused the ire of Carl Rosén, CEO of the Swedish Shareholders’ Association (Aktiespararna). According to TT, Rosén voted against immunity at the meeting.

“The Swedish state is neither acting professionally nor coherently when it votes to free them of responsibility,” he wrote on the association website.