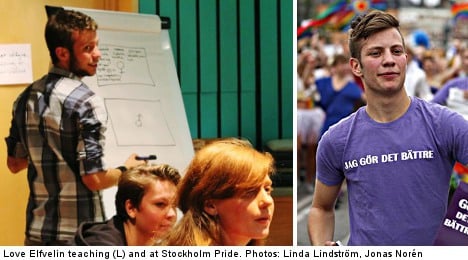 Elfvelin has never identified as a girl, not even at daycare, but he decided to suppress the feeling while at school. By age 16, however, he could no longer ignore his true gender identity.

Since “coming out as a boy”, Elfvelin has faced an array of reactions. Some have accused him of wanting attention, while others claimed it was youthful folly that would pass.

“Some even said I wanted to be a man because it was easier than being a woman,” Elfvelin told The Local.

The gender reassignment process varies from individual to individual. It is supposed to take about two years but for many it takes a lot longer, Elfvelin said.

At first, he simply accepted that he would lose his ability to reproduce when going through the entire process, which usually involves counselling, hormone therapy, and then gender reassignment surgery.

While the Christian Democrats who this week said there were very few transgender Swedes who want to keep their born sex’s reproductive capacity, the Swedish LGBT rights group RFSL argued against them.

“There are trans-men who would like to carry babies, and now they can do that and still change their legal gender,” RFSL head Ulrika Westerlund told The Local.

“Others might want to save sperm or eggs, and use them later, even if they also want surgery that results in sterility.”

Regardless of the statistics, however, Westlund said it was simply not OK for a country to force surgery on its citizens, especially when it was neither need nor desired.

She dismissed MPs Annelie Enochsson and Tuve Skånberg as Christian Democrats known for kicking up a fight when their own party decided it officially wanted to scrap the sterilization law.

The two MPs also quoted scientific studies that showed it can be dangerous to keep your original gonads while taking hormones, with cancer a possible result. That argument doesn’t cut it in RFSL’s eyes. Westerlund said not only were there contradictory studies into the matter, but medical question should be left to doctors and patients to discuss.

“The point is that people need to be able to make their own decisions on what they want to do with their bodies,” said Westerlund.

In the case of Elfvelin, he does not want to be pregnant but he wants biological children in the future. Apart from the double mastectomy he went through earlier this year, he is staying completely clear of any surgery.

“The sex change operation procedures are pretty poor at present,” he said, adding that how he chooses to have a family in the future would depend on fertility legislation and medical possibilities at that point.

At the beginning of his treatment, five years ago, he had simply accepted that he would lose his ability to reproduce when going through the process. His attitude changed, however, while he was working in Norway for a spell, and heard that the sterilization debate had flared up properly at home in Sweden.

“When I heard about it, I realized I wanted the same possibilities to start a family as everybody else,” Elfvelin said.

A Stockholm administrative appeals court ruling in December 2012 has already set legal precedent by stating the current law was in breach of the European Convention on Human Rights and the Swedish constitution.

The ruling meant Elfvelin finally applied for a personal ID number that would identify him as a man, without having to be sterilized first.

“For me this wasn’t, in the beginning, a personal fight, but about standing up to idiotic politicians,” Elfvelin said.

Because of the court ruling in December, Elfvelin reacted to news of the Wednesday op-ed by the rogue Christian Democrats by saying “Good luck to them, they’ve already lost”.

He added that there was much awareness work still to be done and that many transgender Swedes would still face administrative hurdles.

“Maybe, for example, when the fertility clinic helping me stimulate egg production in the future enters my male personal id number, the system will tell them a man can’t register for the treatment,” Elfvelin offered as an example.

He would also like the gender reassignment doctors and nurses to liaise with the fertility clinic in order to explain the situation to other healthcare staff.

“We will, in effect, become a new patient group,” Elfvelin said.

As for the Christian Democrats’ repeated call for research into the well-being of children born to a man, Elfvelin had little patience.

“We all know that children born into rainbow families have been longed for by their parents,” he said.

“Those children will probably receive more love than kids made by accident. Everyone who knows me thinks I’ll be an excellent parent.” LGBT
In Pictures: Tens of thousands turn out for Stockholm Pride parade
Url copied to clipboard!