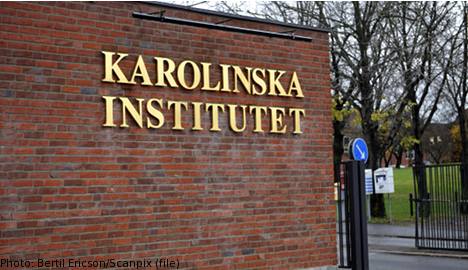 Karolinska was joined by the Stockholm School of Economics (Stockholms Handelshögskolan) at the top of the list, which was compiled annually by independent academic group Urank.

“We’ve done this for six years so were not very surprised with the results, it’s more or less the same results every year, just like most rankings,” Urank statistician Stig Forneng told The Local.

“As usual, the bigger universities scored better than the small ones, and the vocationally oriented institutes performed best overall.”

The biggest mover on the list was Karlstad University in southern Sweden, which cracked the top 20 by jumping five places from last year to 17th this year.

The list is put together using a large number of statistical variables. For example, Urank examines the academic quality of students accepted to courses, the weight attached to research, and the proportion of research students with an international background.

However, the ranking does not measure the quality of individual courses. It also disregards the quality of student life and the availability of accommodation, one of the most important issues affecting students’ choice of college or university.

Forneng pointed to the relatively similar lists over the years as typical of Sweden, with a similar trend apparent in China and the US, for example.

He added that Sweden’s traditional universities benefited from their greater resources and more attractive courses for high status professions such as medicine, engineering and veterinary.

“In the top-scoring universities, most of the students needed relatively high marks just to get into the school itself, and accordingly, they find it easier to get jobs when they come out on the other side,” he said.

While Forneng pointed to Karlstad’s jump of five places as the most apparent change on the list, he explained that the small details were where the changes are most interesting, highlighting Jönköping as an example of an institution punching above its relatively small weight.

He added that it wasn’t just the students who could benefit from the list.

“We put together this annual list for the students, but also for the universities themselves. It’s interesting to see how you compete with the other institutions, and it’s possible to compare variable if you want to better yourself,” Foreng told The Local.