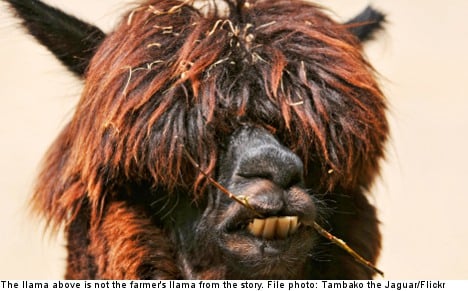 “There are a growing number of wolves coming to southern Sweden and they’re killing farmers’ sheep. So we realized that we needed to offer help,” Nils Carlsson, expert on predatory management at Skåne’s County Administrative Board (Länsstyrelsen), told The Local.

“So we have been looking at llamas.”

While farmers with smaller properties can generally keep wolves at bay by ensuring their fences are strongly secured to the ground, those with larger estates don’t have the same luxuries.

In a new attempt to keep the wolves at bay, local officials will introduce four Swedish-bred llamas at the end of April to two large estates in the Skåne region.

“It’s important to stress this is just a trial. We’re not saying this will save the sheep population or prevent any deaths necessarily, but it may help, and we’re keen to find out,” said Carlsson.

Llamas have been trialled already as sheep guardians in the US, with authorities finding pleasing decreases in coyotes attacks. The Skåne Board is hoping that the natural fighting instincts of llamas will yield similar results against the Swedish wolf.

“Llamas are quite big, they’re around 150 kilogrammes, and have strong guarding instincts – they naturally confront predators,” Carlsson explained.

“We hope this means they will discourage attacking wolves who typically prey on the sheep and often kill several in one attack.”

The Swedish state pays 3,000 kronor ($468) to a farmer for every female, fully grown sheep killed by a wolf.

The idea, however, has already caused a backlash from the public, with many animal lovers fearing that innocent llamas may die while on duty. But Carlsson remained optimistic.

“We know it’s not a black and white solution, but if it can decrease the number of sheep killed then we’re on the right track and can consider rolling out the concept further across the region,” he told The Local.

“If introducing one llama saves the lives of four sheep, then it’s already paid itself off.”

The llama (Lama glama) is native to South America and can grow to be 1.8 metres tall and 200 kilogrammes. They can live to be up to 30 years old.