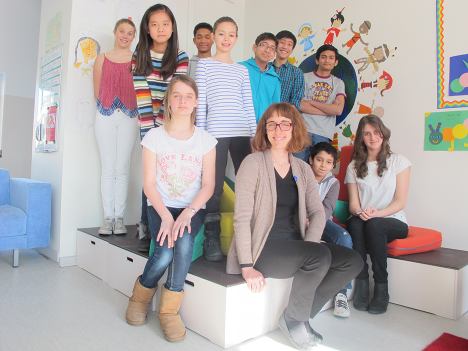 Photo Gallery: ISSR pupils on why their school makes the grade

You won’t find any of the above in your average textbook, but it is daily life at the International School of the Stockholm Region (ISSR).

ISSR opened its doors in August 2012 as the first publicly-funded international school in the Swedish capital. It now caters for around 280 pupils, aged from five to 19, whose families have moved to Stockholm on a temporary basis.

There are many reasons why.

Mayur’s father was transferred by his company from India and brought his family with him. Isabella has Swedish ancestry and her parents were keen to try a move from the US to Europe.

Mohammed is from Libya and his father is currently studying in Stockholm. Studying in English in an international environment was important for Linh when moving with his family from Vietnam.

Yasmin grew up in Sweden but moved to Oman when she was eight years old. Having previously attended an international school she is back in Stockholm learning her Swedish again.

“We study in English,” Mohammed says. “Since it’s the international language of the world I can continue my studies whichever country I move to in the future.”

“It’s cool that you get to meet people from so many places,” adds Isabella. “Everyone has different opinions and you get more of a global understanding.”

“The fact that we are all really different I think is what brings us closer together,” says Yasmin.

A further common feature of the school is that all pupils follow the International Baccalaureate (IB), which is split into three programmes – Primary Years Programme (PYP) ages 5-11, Middle Years Programme (MYP) ages 12-16 and the Diploma Programme (DP) ages 16-19.

“My parents and I chose this school because it follows the IB system,” says Linh. “If we move anywhere in the world they can find an IB school so I can catch up really quickly. The assignments are different, but the grading and the way they teach you is basically the same.”

Today, IB works with schools in more than 140 countries educating around one million children worldwide. At its core is an emphasis on student ownership.

“We instil in the children that they really should take ownership of their education,” says ISSR Deputy Head Christiane Candella.

“From the very youngest pupil, that means being an inquirer, learning how to ask questions, being a thinker, talking through potential answers to questions, being a risk taker, being open minded and caring for one another.” she adds.

The pupils appreciate being handed tools for life-long learning. “It’s a system that makes me more independent and care more about my own work,” Yasmin says. “That opens a lot of doors for me in the future.”

“This school teaches us how to learn,” Majur adds. “So when it comes to entrance exams for university I will be prepared in what I should learn and how I should learn it.”

The children discuss their future ambitions in terms of where they want their studies to take them. They talk of learning more languages in European capitals or going to university further afield.

“This is their rhythm” Candella says. “If you take a child who has been to five different schools in the last few years and drop them into a Swedish school it’s likely that they are going to be the only one that is new that year.”

“Everyone else has their friends, their social networks and sports teams all figured out,” she adds. “Once in a while you see a child affected by the transience but generally they see everybody else is just like them – so its normal.”

Candella herself has experienced a fast-moving career for the past 11 years since leaving her home in the US. A trained IB teacher, she worked in Paraguay, Mexico, and Ukraine before moving to Sweden.

“I really like working with these types of children,” she says. “I think they’re interesting and I wouldn’t want to work anywhere else.”

And that’s the type of teachers ISSR look for. “Everyone of our teachers has worked at least in one other country and really enjoys this demographic,” Candella adds. “They realise that it is very unique and it needs a special touch.”

In its first academic year, the school has held a number of bonding days for pupils to take part in various activities from skiing to rock climbing. Sports teams are beginning to compete with other international schools in the Swedish capital.

An active Parent-Teacher Association has been set up, fundraisers have proved fruitful and, having established a relationship with a sister school in India, ten students were selected to visit in February.

“A year and a half ago we weren’t on the map,” Candella says. “We are probably the best choice for families who are here temporarily – for the diplomatic, business and research community to be able to come live in Stockholm, know that their children are going to get a good education ensure their we make the best possible transition for them to Stockholm and out of Stockholm again.”