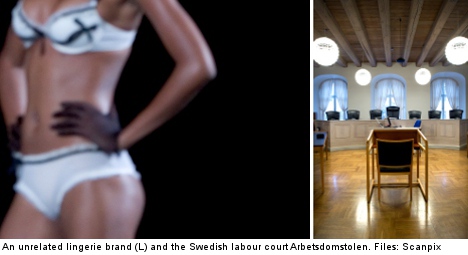 In 2011, the shop assistant at the heart of the case became uncomfortable with displaying her bra size during her shifts at the Gothenburg outlet of Scandinavian underwear company Change.

The case progressed when she turned to her union for help. By January 2012, the Commercial Employees’ Union (Handelsanställdas förbund – Handels) announced it was filing a lawsuit demanding the company pay 300,000 kronor ($43,410) in compensation to the former employee.

“We don’t feel it’s helpful at all for someone’s breast size to be visible,” the union’s press secretary Kristina Jogestrand told The Local at the time.

Wednesday’s judgement stated that it was obvious the tag was only applied to the plaintiff because she was a woman. The labour court ordered Change to pay the former employee 50,000 kronor ($7,800) in damages for the discrimination.

“It’s a relief that they were found guilty. The verdict shows that employers can’t go too far,” the woman told the TT news agency on Wednesday.

She said she did not care that the damages were less than they had asked for.

“I didn’t do this for the money, I did it to put my foot down and tell them enough is enough,” the woman said.

Her union representative Jaana Pålsson was also satisfied with the ruling.

“This is also a victory for all employees and their integrity,” she told TT. “The labour court really put its foot down and said no.”

Since the start of the legal process, the company has said that the tags were introduced to help customers get a better grip of bra sizes. It also said that wearing the tag was optional for its employees. The former employee, however, who worked for Change for 18 months, said it was store policy to wear the tag.