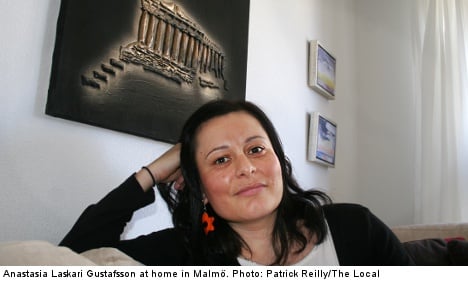 Can Greece count on the support of Malmö’s nearly 600 Greek-Swedes next month when the southern Swedish city hosts the Eurovision Song Contest? Well, not likely, as many of them say there is no such thing as a free lunch.

There’s certainly no lack of home sickness in Malmö’s 580-strong Greek community, the city’s 31st largest immigrant group, but it hasn’t translated into unwavering patriotism when it comes to performing a winning tune at next month’s Eurovision Song Contest.

“I’ll be supporting Greece as the song is pretty catchy unlike the usual garbage,” Anastasia Laskari Gustafsson, 36, tells The Local.

However, her concerns about an unlikely Greek win are financial. The winner of Eurovision usually goes on the host the following year’s event. And the events are usually star-studded, extravagant affairs and Gustafsson says such a bash is simply beyond Greece’s means at present.

Laskari Gustafsson swapped her native Patras for Malmö in 2009 before the worst of the financial crisis hit her home country. Many Greeks have followed in her tracks to find work in Sweden, but Laskari’s reason was more personal – love.

“I’m from the third largest city in Greece which is by the sea and came to the third biggest in Sweden which is also by the sea. It was meant to be,” she tells The Local at the home in the heart of Malmö that she shares with her husband Andreas.

Gustafsson has been keeping an eye on the news in Greece, ever since the country was engulfed in a debt crisis that has resulted in mass unemployment and emigration.

“I feel really sad and also angry at the failings by both the people and the politicians that put Greece in such a mess. Now we are paying the price.”

The 36-year old says leaving her family behind was difficult, but freely admits that Sweden is the right place for her, particularly as she recently became a mother. Home, though, is never far from her thoughts.

“I’m the only daughter in a traditional Greek family. Our customs are that the daughter takes on the role of caring for the parents in old age but now that I am here that can’t happen,” she says.

“It’s hard for them with me being so far away.”

A Greek win at Eurovision would be a surprise and perhaps unwelcome one given the current economic situation. Greece has triumphed just the once – back in 2005 – and will compete this year with a song entitled Alcohol Is Free.

Malmö has its fair share of Greek restaurants with one of the best run by Irini Borglin, 58. She embarked on her own Swedish adventure at the age of 40. A native from the island of Leros, she hasn’t looked back since coming here with her late husband.

Borglin decided to face the bitter winters of Skåne to give her children a better chance of furthering their education. Despite early struggles with the language, she was able to start up her own business.

“In Sweden it doesn’t matter what you have done before you came here, so you have to start from scratch,” she says matter-of-factly at her Kamaki restaurant in western Malmö.

“The city authorities gave me a loan to get the business off the ground. Without their support this restaurant wouldn’t exist,” she adds.

She says Greece has one lesson to learn from Sweden.

At the same time, however, Borglin admits that at times she feels the taxes in Sweden add up and she has worked so hard her health has been affected. At the moment, however, her despair is reserved for what is happening back home.

“Greece was better off with the drachma. Are we supposed to repay the bailout money with yoghurt and feta cheese? The crisis was inevitable.”

Now a Swedish citizen, Borglin says she has no intention of returning to Leros when retirement beckons in seven years. Her compatriots could learn something from her adopted land she says with a smile.

“In Sweden people are very calm and responsible but in Greece it is quite chaotic. The mentality in Greece was to take and take without giving anything back so it wasn’t a surprise there was so much tax evasion going on,” she explains.

“Using your brain and working hard will take you far in Sweden.”

As for the imminent Eurovision finals, the expat Greek laughs at the title of the song her country will perform at the Malmö Arena – Alcohol Is Free.

“The alcohol won’t be free at my restaurant even if Greece wins,” she quips

By numbers: a snapshot of Malmö’s Greek population

-Greeks are the 31st largest nationality group living in Malmö

-3,166 Greek-born residents have moved to Sweden in last three years