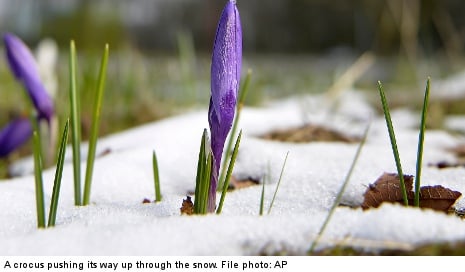 SMHI issued a class 1 weather warning – meaning weather conditions may involve some risks and disruptions – for the west-central regions of Värmland and Dalarna.

Twenty centimetres of wet snow is expected to fall in the region between Friday afternoon and Saturday morning and the rest of the country will see stormy weather over the weekend, too.

“It is mainly the northern parts of Värmland and Dalarna that may see some snow, but the south-western parts of the country may also get heavy rainfall,” Mariann Aabrek of the Storm weather agency told tabloid Expressen.

The snow clouds heading towards the mountain region of Dalarna on Friday morning came in from Denmark and look set to move south on Friday afternoon.

The stormy weather is expected to reach central and northern parts of Sweden on Saturday.

But the clouds may have a silver lining. Sunday will bring milder weather and some sunshine, with temperatures expected to reach 10C in southern Sweden.

However, don’t put the rain jackets away just yet. SMHI predicted that the clouds will return on Monday, though it looks unlikely that there will be more snow.