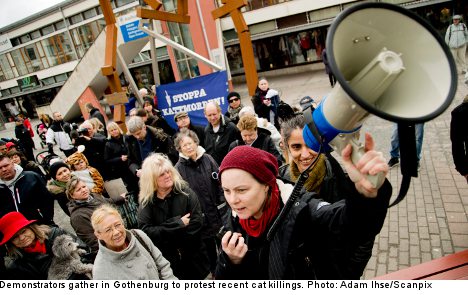 “We want to push for the establishment of an animal protection unit within Gothenburg police,” said demo organizer Lotta Lagerström to the TT news agency.

Lagerström explained that a dedicated unit within the police would ensure that all animal cruelty cases would be managed in the same office and could thus be solved more expediently.

The demo is scheduled to take place on Saturday evening and has generated a great deal of interest on Facebook with more than 300 people signed up to attend by Saturday lunchtime.

The initiative follows a series of apparent cat murders in the area in recent weeks with five cats having been found sliced open and hanging in trees.

A 34-year-old man was arrested over Easter on suspicion of having carried out the gruesome feline killings. The man however denies the allegations.

“It is absolutely not me who has carried out these crimes. I have read about the dead cats and thought that it was just as disgusting as everyone else,” the man said in an interview with the local Göteborgs-Posten daily this week.

The man was held by police for three days of questioning and was then released. While Gothenburg police advise that the man remains of interest in their investigation, suspicions against him have eased somewhat.