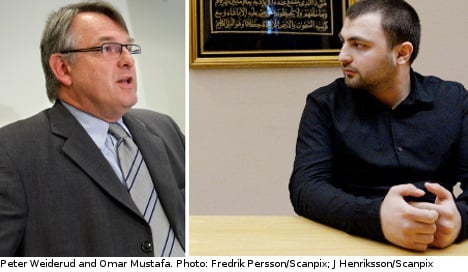 Weiderud however does not share Mustafa’s view, expressed in his resignation statement, that the party leadership has made it impossible to “combine a party position and a position in Muslim civil society”.

“This is Mustafa’s interpretation,” Weiderud said. “The Party leadership did not say as much, they said that it is impossible to be leader of the Islamic Association and at the same time sit on the governing board.”

Weiderud however agreed that in a broader perspective the party leadership”s stance could be a deterrent for people of faith to become involved.

“Some 70-75 percent of Sweden’s Muslims vote Social Democrat. From that perspective, it is obvious extremely important that we have at least one Muslim on the governing board.”

Omar Mustafa, 28, was chosen to sit on the governing board of the left-of-centre opposition party at last weekend’s party congress.

The election proved controversial however, with much of the criticism concerning an invitation issued by the Islamic Association to speakers with known anti-Semitic views.

According to TT, the Islamic Association’s bylaws also state that men and women have different legal status.

Party leader Stefan Löfven issued an ultimatum on Saturday and Omar Mustafa resigned from the party later the same day.