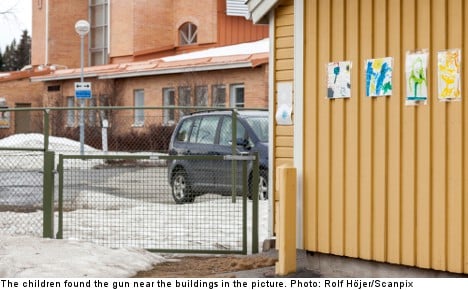 Luckily the shot was fired into the ground and none of the children were hurt.

“It could have gone really badly. The children could just as well have started playing a war game and begun shooting at each other. It is also an area with lots of people and children milling about,” said Simon Wormö at Västerbotten police to the TT news agency.

When the shot rang out of the kids became scared.

“It made a loud bang and they ran off to an adult who called us. He then looked after the weapon until a police patrol arrived,” Simon Wormö said.

When police checked the gun, they found a bullet in the barrel and several live rounds of ammunition in the magazine.

The weapon appeared to have lain on the ground for an extended period of time, become snowed in and then re-surfaced as the snow thawed.

The police will run a background check on the gun to try to ascertain its origin.

“We are trying to establish if it is a legal weapon, if it has been reported stolen or has been used in a crime.”

The police will also talk to the children and their parents to discuss the incident.