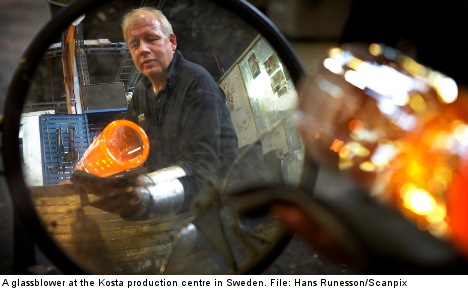 The company announced sweeping cuts in 2012, with its staff of 230 slimmed down almost by half to 130, reported the Svenska Dagbladet (SvD) newspaper on Monday.

The company’s Swedish outfit in Kosta will be turned into a warehouse and logistic centre, where it will also make its art objects and crystalware. Sales and marketing will be moved to Gothenburg, while the lion’s share of industrial productions will be shipped abroad. CEO Magnus Andersson compared the move to previous industrial shifts in Sweden.

All production at the company’s Åfors and Orrefors locations will end in June, while the proportion of foreign production will surge to 65 percent. The company has not turned a profit for almost five years, with the financial crisis pulling the rug from under some of its key markets. Greece was once the company’s third largest market and has now shrunk to near nothing.

Andersson, meanwhile, intimated it was possible to gauge the health of an economy by its citizens’ glass-buying.

“You usually buy glasses, vases and other glassware when you move, or if you are promoted or get a new job, and we see very clearly that the Americans are buying more new products,” he told SvD about the US, which accounts for 20 percent of the company’s sales.

The company will soon open a new boutique in Shanghai.

“We can’t die with our consumers, we need to find new ones,” Andersson added.