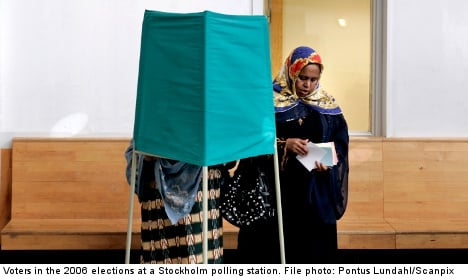 Neighbouring Norway and Finland have already done digital voting test runs. Now some Swedish municipalities could follow the trend after a majority of members in the parliamentary election law committee voted in favour of a new proposal.

“If it works well, it would be a natural step to introduce it in the 2022 elections,” Billy Gustafsson, Social Democrat committee member, told the Riksdag & Departement (R&D) newspaper.

Voting online could help Swedes abroad vote and may encourage some voters with disabilities to cast their ballot when it is possible to do so in front of the computer, in lieu of grappling with the polling station. R&D reported that lawmakers hoped it could increase voter numbers overall and that it may entice younger Swedes to have their say when voting was moved online.

“We’re really in favour of online voting, and would love to try it out already in 2014,” Lars Beckman, a Moderate Party committee member, told the paper.

However, the proposal was not met with unanimous approval.

“I see big problems with the secret ballot. There’s a risk that people will be forced to vote in a certain way, by a family member for example,” said Green Party representative Max Andersson.

He also said that online voting may be vulnerable to fraud or manipulation. That theoretical vulnerability, regardless of whether fraud took place or not, could make Swedes suspicious of the electoral process and democracy, he said.

POLITICS
What Britons in Europe need to know about the UK government’s ‘votes for life’ pledge
Url copied to clipboard!