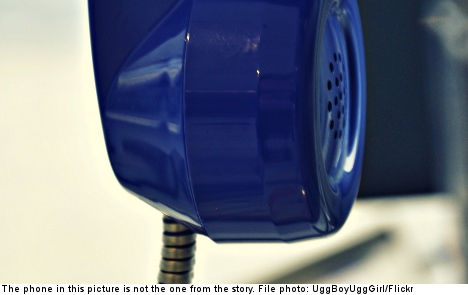 The Hansson family’s home near Ängesåsen in western Sweden was left completely destroyed by a fire in the autumn of 2011.

While the family waited for their home to be rebuilt, they had telephone operator TeliaSonera connect their fixed phone line to a temporary address nearby.

With their new home completed, the Hanssons contacted the phone company once again to request to have their phone service reconnected.

The response they received, however, came as a shock.

“I couldn’t believe it. I can’t pay that much just to get my phone back.”

While it only cost around 500 kronor to have the family’s number moved to their temporary address, moving the account back to their new home isn’t quite as simple.

Because the Hansson’s new home was built from the ground up and must be reconnected to the telephone network, setting up the service at their old address is viewed by TeliaSonera as starting up a totally new account.

Part of the problem is that the line connecting the home to the telephone network was also destroyed by the fire, and the phone company has said it will cost 17,000 kronor for the work involved in connecting the line to the nearest telephone pole, which is 30 metres away from the edge of the Hansson’s new home.

As mobile phone coverage is “terrible” in the mountainous area, the family views having a fixed line as a necessity.

“It’s regrettable that the family was hit with an expense like this. We need to head out to the scene to sort this out,” Marcus Haglund, spokesman for Teliasonera told SVT.

“But it’s strange that their insurance doesn’t cover this.”