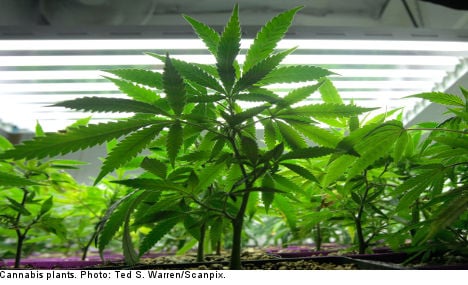 “Since marijuana is illegal in Sweden we gave our licence to the American company Radiant,” Heliospectra CEO Staffan Hillberg told Svenska Dagbladet (SvD).

“It’s a brand new market, getting the same buzz as Viagra did in its early days.”

Marijuana for medicinal purposes has been legalized in 18 US states and the industry has subsequently blossomed in recent years.

While Hillberg underlined that the firm only sells its product in jurisdictions where marijuana has been decriminalized, some experts have expressed reservations.

“The problem is that most of the marketing and sales of the drug is directed at young people and it’s easy to get a hold of, all you need is a doctor’s note and nowadays they are pretty liberal with prescriptions,” Erik Leijonmarck at the Institute for Security and Development Policy (ISDP) told The Local.

Despite his reservations, Leijonmarck argued that a Swedish company shouldn’t be singled out for supplying US firms with equipment to grow marijuana.

“That a Swedish company is selling equipment used to make marijuana is a shame, but it’s bound to happen,” he said. “We unfortunately have to accept that some states have decided to legalize marijuana.”

Leijonmarck also claimed that in Sweden, where the use of marijuana for any purpose remains illegal, the weed is grown in large quantities by a lot of young people utilizing Swedish technology and equipment.

“The equipment used is most probably supplied by Swedish companies, they’re the ones we should be focusing on,” he said.