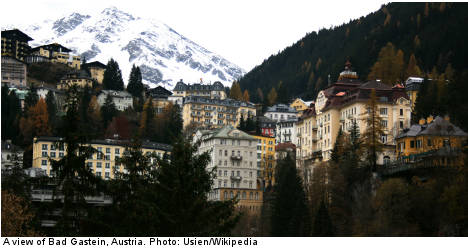 The hotel owner, Thomas Fleetwood, was doing a final check at Hotel Eden in the Austrian resort of Bad Gastein near Salzburg on Monday when the one-person lift he was in broke down, reported Austrian Times.

He was travelling from the fifth floor to the ground floor and had left his mobile phone on his desk. According to an AFP report his repeated desperate cries for help went unheeded and attempts to escape through the lift roof failed.

The hotel was closed at the time, police said.

“The lift has never broken down before, I just hadn’t expected anything to happen,” Fleetwood told Austrian Times.

“I broke a small glass panel at the front door of the lift and that gave me some fresh air, and tried to take off the roof of the lift to climb out, but that didn’t help either.”

Eventually a friend delivering bread alerted rescue services after noticing post piled up outside the hotel.

Fleetwood was treated in a local hospital. He is now “in good health, telling officers that a survival course with the Swedish military had set him in good stead,” police said.

“It was foolish to have gone in the lift in an empty hotel without a mobile telephone, but I am proud of myself that I didn’t panic and used my military training to get through. I would talk to myself and was making my plans for the future while I was stuck there,” said Fleetwood.

PARTNER CONTENT
‘It really feels like a dream come true’: working in a Paris palace hotel
Url copied to clipboard!