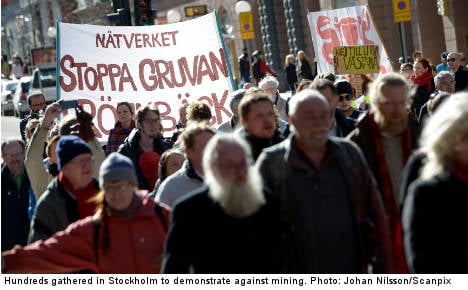 Around 30 organizations participated in the demonstration, which was organized by Nature and Youth Sweden (Fältbiologerna), a nationwide association for children and young people interested in environmental issues. Smaller demonstrations were also planned in five other Swedish cities and towns.

Nature and Youth Sweden describe mining as a threat to the environment, to sustainable development and to the livelihoods of indigenous populations.

“The mining boom is a threat to our and coming generations’ futures”, Nature and Youth said in a statement.

It continued: “We demand a radical change to the minerals law and a re-written minerals strategy.”

Sweden’s minerals strategy is aimed at enhancing the competitiveness of Swedish mining and mineral industries.

“It is pretty clear that this process is not just happening on a local level but across the world,” one demonstrator, called Mirja Palo, said of the growing mining industry.

Paolo, who is part of the network “No mines in Jokkmokk”, told local newspaper Norbottenskuriren that mining leads to involuntary displacement.

She was disappointed that politicians had not joined the demonstration in Stockholm but said it was “fantastic” that so many representatives of different groups from around Sweden had turned up.

Nature and Youth Sweden have been prominent in other anti-mining protests around Sweden. In February the organization held a demonstration in Jokkmokk in the far north.

Around 300 people joined in to protest against local mining projects. The demonstration was supported by several Sami villages, which also supported the Stockholm demonstration on Saturday, according to Norbottenskuriren.