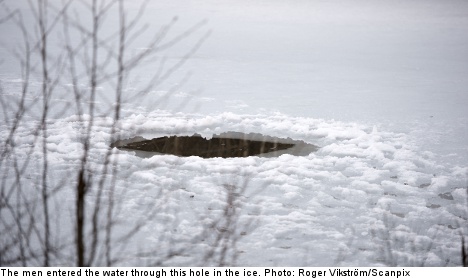 “We have got both of them up, but there is no life left to save,” Jonas Wangenborn of the local rescue service told the Aftonbladet newspaper.

The men, aged 29 and 24, had been diving in a limestone quarry that was filled with water and covered in ice, located a few kilometres east of Eskilstuna. Neither was equipped with an oxygen tank.

One of the men’s girlfriends was on the scene, and raised the alarm after the pair did not resurface after 15 minutes.

A search party of 18 emergency personnel, including divers from nearby Västerås, looked for the men for several hours, finally discovering their bodies around 7.30pm.

Local authorities estimate the lake to be up to nine metres in depth.

As to why the men were diving without proper equipment remains unclear, with experts still unsure how and why the men weren’t able to resurface, despite having a safety rope that led to the water’s edge.

The families of the men have been notified.