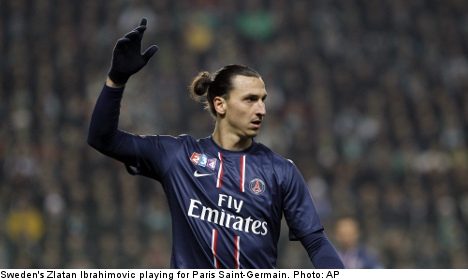 Ibrahimovic’s 27 goals in 29 Ligue 1 games for Paris Saint-Germain, the most recent coming from the penalty spot in Sunday’s win against Nice, have put the French capital club within sight of a first title since 1994.

A report in Gazzetta dello Sport in midweek claimed Ibrahimovic and his wife had been house-hunting in Milan.

And on Saturday Gazzetta claimed Juventus coach Conte had personally contacted Ibrahimovic to express his admiration for the player.

The report added, however, that Juventus would only be prepared to pay PSG 10 million euros ($13m) for Ibrahimovic, who would be paid 7.5m euros annually plus bonuses.

In France, the daily Le Parisien on Saturday reported that the striker will reconsider his future at the Parc des Princes if coach Carlo Ancelotti leaves the club this summer.

“Zlatan should still be in Paris next season but a transfer is possible if the situation at PSG changes, which means if there is a change of coach or if the owners’ project for the club evolves” his agent Mino Raiola was quoted as saying.

Despite lacking a centre forward with a killer eye for goal this season, Juventus have been Serie A’s strongest side and require seven points from their next six league games to secure their second consecutive Scudetto under Conte.

Juve had hoped to sign a leading striker for their Champions League campaign earlier this season.

But after losing out on Didier Drogba, who signed for Galatasaray, Juve agreed terms with Athletic Bilbao and Spain striker Fernando Llorente, who will sign a four-year deal with Juve on July 1 when his Athletic deal ends.