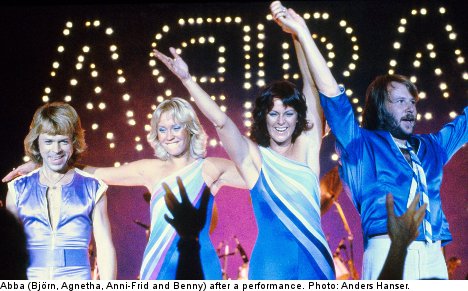 After Abba The Movie in 1977, the Mamma Mia musical and movie, and a 2010 travelling museum exhibit, the world’s first permanent Abba museum will open in central Stockholm on May 7th.

“We’re going to offer visitors a unique experience,” museum director Mattias Hansson tells AFP, revealing that they may even get a chance to speak live with a band member.

After months of construction, the modern, blonde wood building in the leafy Djurgården neighbourhood is nearing completion.

As opening day looms, convoys of trucks roll up to the site to deliver the furnishings and items that will make up the collection: flamboyant sequined costumes, gold records, and recreations of their recording studio and dressing rooms, among other things.

Workers bustle to finish what will be a temple to the creators of some of the biggest hits of the 1970s, including Voulez Vous, Dancing Queen, and Waterloo, the song that won the band the 1974 Eurovision Song Contest and thrust them onto the international scene.

Through the museum’s big windows, passersby can catch a glimpse of a large main room. Few people have been authorized to enter the premises, as organizers are intent on keeping things under wraps until the official opening.

But they have let slip a few details.

For example, fans who have dreamt of becoming the fifth member of the band will be able to appear on stage with the quartet and record a song with them thanks to a computer simulation.

And in another room dedicated to the song ‘Ring, Ring’, a 1970s telephone will be on display. Only four people know the phone number: Abba members Agnetha Fältskog, Anni-Frid (Frida) Lyngstad, Benny Andersson and Björn Ulvaeus, who may occasionally call to speak live with museum visitors.

“It was Frida’s idea … so of course she’ll call,” says curator Ingmarie Halling.

The museum will naturally pay homage to Abba’s music.

“We have to have the best isolation in the world to be able to play different music in each room,” Hansson jokes.

But he doesn’t expect visitors to flock to the museum to hear the group’s hits, since fans already know them by heart.

Rather, they will get to relive the band’s active years and get a sense of their lives behind the scenes.

ABBA last appeared on stage together in 1982, and split a year later.

They have repeatedly refused to reunite.

“We will never appear on stage again,” Ulvaeus said in a 2008 interview with Britain’s The Sunday Telegraph.

“There is simply no motivation to regroup. Money is not a factor and we would like people to remember us as we were,” he said.

After the split, the band members each went their own way and they’ve rarely appeared in public together – in 2008, they attended the Stockholm premiere of the movie Mamma Mia – so getting all four involved in the making of the museum is a coup.

Halling – the band’s stylist from 1976 to 1980, an era she describes as “fun and magnificent” – has been instrumental in collaborating with them.

“They’ve lent us lots of stuff and I call them to tell them my ideas and they say, ‘sure, go ahead!'” Halling explains.

As the person behind some of their glitzy and flamboyant costumes, Halling has made sure that many of their outfits are included in the exhibit.

Visitors will also be “able to experience how the Abba members lived their lives,” she says. The four will recount their own side of things in the museum’s audio guide.

The group dominated the 1970s disco scene with their catchy melodies and kitsch dance routines.

But their popularity has grown over the years beyond those seeking a little nostalgia from a bygone era.

The 1999 musical Mamma Mia, and the 2008 film of the same name starring Meryl Streep, brought their music to a whole new generation of fans who weren’t alive in the 1970s.

The group has sold some 378 million albums worldwide, outdone only by Elvis Presley and the Beatles.

“Our office is right next to Benny Andersson’s. When I tell people in other countries that, and that I pass him on the street sometimes, people are like: ‘No! Really? He walks in the street just like that?’,” says Jeppe Wikström, an editor working on a book of previously unpublished Abba photographs.

The museum’s website says it expects to attract a quarter of a million visitors in 2013.

“Abba is part of Sweden’s musical history, it’s only right that there be a museum dedicated to them: they deserve it,” he said.

Tickets for the museum – which cost €23, or $30 – are almost sold out for the first few weeks, going primarily to tourists from abroad, museum director Hansson said.

Those who can’t get their hands on a ticket will have to be content with a glimpse of some of the band’s costumes on display at the arrival hall of Stockholm’s Arlanda airport.