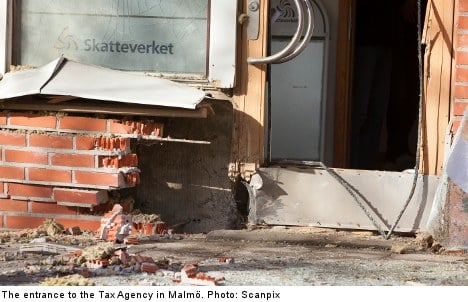 “There is no heightened threat against Skatteverket. But of course, we are taking this very seriously,” Kjell Dahlström, regional head of the agency, told the TT news agency.

The explosion occurred just before 2am on Wednesday morning at an office on Kungsgatan in central Malmö. No one was injured in the blast.

“We got several calls from people who had been woken up by a powerful bang,” Lars Lindwall of the Skåne police told the Sydsvenskan newspaper.

Officers arrived to find the front door of the building blown away and glass and debris spread over a 20-metre radius. Areas inside the building were affected by the blast.

“We’ve had a forensic team on the scene throughout the night. We need to keep an eye out and see what it comes to,” Lindwall told the paper.

The building, which also has offices for the Swedish Enforcement Agency (Kronofogden), has over 500 employers.

Police still have no suspects, but have labelled the crime as public devastation (allmänfarlig ödeläggelse).