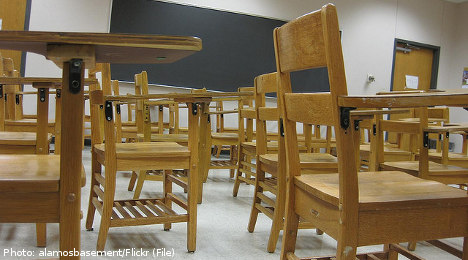 The municipality will be held responsible following the review by the country’s school inspectorate (Skolinspektionen), which on Sunday stated that if the school was not brought into line it faced the hefty fine. The report reviewed a recent investigation into The International School of Lund – Katedralskolan (ISLK) in southern Sweden.

When its students reached 16 and were ready to move on to high school (gymnasium), they could be missing out on opportunities enjoyed by other students around the country whose schools followed the Swedish school law, the review noted.

Some parents have long been angered by the school’s behaviour.

“Unfortunately, and I speak on behalf of all parents, we are like captives here,” explained one anonymous parent to The Local.”A lot of the families with children there don’t have a choice. There’s no other option for international families.”

The school has been run by the City of Lund since 2006 and does not follow the Swedish curriculum, instead following the primary and middle school programmes set up by the International Baccalaureate Organization (IBO).

Inspectors said on Sunday that the school failed in many of its obligations set out by law, and that many of the points had been brought up with them almost five years ago.

For example, in 2008 the inspectorate had pointed out that the school did not teach the children woodwork, sewing, or home economics, which is mandatory in Swedish schools but not part of the IBO’s PYP and MYP programmes.

The teachers were also found to use exclusively the grading system set out by the international organization, instead of Swedish standards.

The inspector clearly understood that keeping to the foreign system made it easier for children whose parents move around a lot internationally to pass from one school to another with grades easily interpreted in the new place. Yet such reasoning was not grounds for disregarding Swedish law, the report underlined.

The lengthy report also said it was clear that the school only focused on making sure it was in line with the foreign system’s regulations, and not its compliance with Swedish rules.

“The fact that the school was fined brings no surprises to me,” the anonymous parent said.

“A lot of us have been calling for change over the years, but it has always felt like we were met with a wall of arrogance and incompetence,” the parent said. The parent hastened to add that the critique was not aimed at the teachers, rather at the management.

The Education Ministry will now look into the report and aims to publish a report by the end of the month.

The school’s principal Ulrika Wiman told The Local that the issue was one for the Lund Municipality and politicians to handle. She declined to comment until the ministry’s report is published.

The school itself must ensure it abides by Swedish law before August this year if the fine is to be avoided.

“It is of course our responsibility to abide the law,” said Louise Rehn Winsborg, chair of the Education Committee of the City of Lund, in a statement. “But we would like to await the results of the investigation. This question has been raised by us already in 2009 and has been on-going since.”