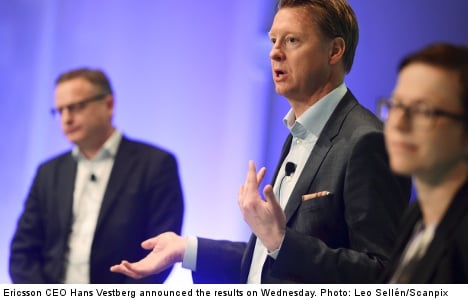 Net profit fell 86.5 percent to 1.2 billion kronor ($182.6 million) from 8.95 billion kronor in the same period last year, when the company recorded a 7.7 billion kronor gain on the sale of its stake in mobile phone venture Sony Ericsson.

The company also took a 1.4 billion kronor hit from restructuring its Swedish operations.

The results were boosted by a 23-percent rise in North American sales, but a high portion of sales from low-margin maintenance contracts in Europe weighed on profits.

“The negative impact from the network modernization projects in Europe will continue to gradually decline during 2013,” CEO Hans Vestberg said in a statement.

“With present visibility of customer demand, and current global economic development, we continue to believe that the underlying business mix will start to gradually shift towards more capacity projects during the second half of 2013.”

Analysts polled by Dow Jones Newswires had expected a net profit of 1.8 billion kronor and revenue of 52.52 billion.

“While macroeconomic and political uncertainty continues in certain regions, the long-term fundamentals in the industry remain attractive,” Vestberg said.

Shares in Ericsson were down 0.45 percent in early afternoon trading on the Stockholm stock exchange, which was trading 0.75 percent lower.