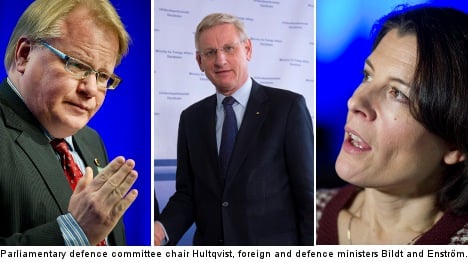 Military sources told the Svenska Dagbladet (SvD) newspaper that the plane passed through the strait last weekend, which coincided with Sweden hosting a large military training exercise with the Baltic states, Finland, and the United States.

SvD had not been able to confirm whether there was any deployment of the Swedish air force fleet, equipped with domestically produced Jas Gripen fighter jets.

The new incident follows revelations that several Russian bombers flew remarkably close to Sweden’s territorial borders over Easter, with Nato planes from Lithuania following suit to monitor them rather than any domestic response.

The lack of Swedish reaction has left opposition politicians seething at the perceived lack of preparedness, while Defence Minister Karin Enström said it was up to the military, not politicians, to make the call in individual cases.

The foreign minister, Carl Bildt, in turn said that he would not demand an explanation for the fly-by from his Russian counterpart.

Nonetheless, Swedish MPs who sit on the parliamentary committee on defence will demand an explanation from the armed forces on Thursday as they assemble to discuss whether Sweden has an adequate state of readiness policy. Opposition politician Peter Hultqvist of the Social Democrats heads the committee.

The latest fly-by follows months of heated debate in Sweden about whether the armed forces are well-equipped and funded enough to protect the country in case of attack. Their top commander, Sverker Göransson, said in the winter that Sweden would only be able to hold back for a week.

Sweden, which is not a member of Nato, is following military developments in neighbouring Russia closely.