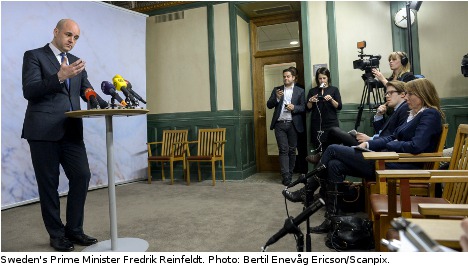 “We have to show that we can not accept threats and violence,” he said on Friday.

Reinfeldt is known for his support of his local team Djurgården and the latest events at the troubled club moved him to act.

Magnus Pehrson resigned from his post as coach of the Allsvenskan team on Friday, citing a fractious meeting with a group of supporters at the club’s training ground earlier in the week.

Pehrson was joined by club chairman Tommy Jacobsson who also announced his departure from the club on Friday.

“I can’t lead an organisation which is run and controlled by these types of elements,” Jacobsson said to the Aftonbladet daily.

The criticism of the Djurgården fans has however met defiant reactions with one of fans involved in the meeting denying that any threats were made and even demanding an apology for the perceived slur.

The club has made a poor start to the 2013 season and on Saturday played host Syrianska at Stockholm’s Stadion.

Djurgården captain Joel Riddez held a speech prior to the match expressing support for Magnus Pehrson and Tommy Jacobsson.

“We players can never allow these dark forces to taint the name of our club,” he said.

The speech began to the sound of jeers and boos but was given applause at the end.

Fredrik Reinfeldt was also criticised on social media for expressing his opinion on football, with some commentators demanding why he elected to speak out on Djurgården when he had remained quiet on other matters.

Sweden’s justice minister Beatrice Ask on Saturday promised that the law would be tightened but could not set a timescale.

“This takes time. It has to be right. You can’t rush a legislative proposal,” she said according to a report in the Expressen daily.