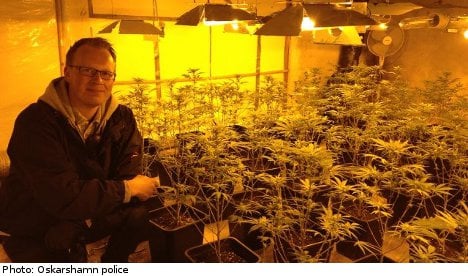 The find was made in the village of Ruda and the police announced their coup via their official Facebook page.

“Coincidence, luck and in part skill led to the find of an enormous cannabis plantation,” police officer Martin Ståhl wrote.

The police posted a photo of the offending weed and promised more details and photos later in the week.

“This is just a small part of what was found,” Ståhl exclaimed.

The police have launched an investigation into the suspected drugs offences and are holding interviews with suspects.

Home-grown marijuana is becoming increasingly commonplace in Sweden, with police reports having quadrupled in the past decade.

Most of the finds are focused on medium-sized operations which are generally well-organized.

Saturday’s find in the rural community of Ruda in southern Sweden has however been described as enormous and is thus out of the ordinary.

According to the Swedish Customs (Tullverket), smuggling of marijuana into the current has declined dramatically as Swedish drug-dealers increasingly turn to homegrown product.