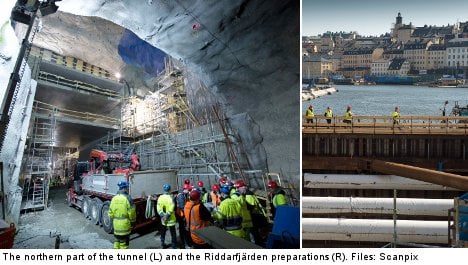 On Tuesday, a 20,000-tonne tunnel section will be lowered into the waters in central Stockholm. It is the first of three segments and will be connected to the southern island Södermalm.

Citybanan, or the city line, has been designed to redirect commuter train traffic from the congested central station by adding a new station below the existing central metro site.

Trains coming in from the northern suburb will first stop at a new station at Odenplan, continuing to the new central station and from there to southern Stockholm.

The idea is to free up the existing central station for national train services as well as freight services.

City planners hope the new commuter train tracks will be in use by 2017.

At 7am on Tuesday, engineers will lower the first 100 metres of tunnel that will take the trains under the waters of Riddarfjärden, the last stretch of Lake Mälaren before it merges with the archipelago at Slussen.

The Transport Authority on Monday invited tunnel enthusiasts to come watch as its engineers start working, even luring would-be onlookers with the promise of free coffee.