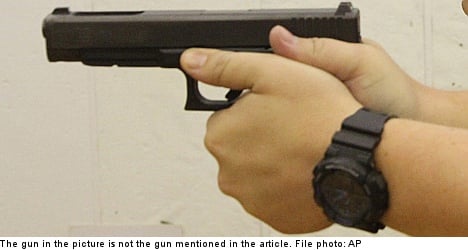 Wishing to give his friend a memorable send-off before he entered into married life, the officer invited the groom-to-be and ten other friends to celebrate at the shooting range of the Halmstad police station in June of last year.

During the festivities, the officer pulled out his gun and fired a few shots before handing the weapon over to the guest of honour, according to a report sent to the disciplinary committee of Sweden’s National Police Board (Rikspolisstyrelsen).

The trigger-happy bachelor then proceeded to fire off about 30 rounds with the officer’s gun, despite the fact that neither he, nor any of the other friends of the officer attending the party, worked within the police force.

As police rules prohibit anyone other than police employees to use a service weapon or to fire shots at a police station shooting range, the officer’s attempt at arranging some pre-wedding fun for his friend have landed him in hot water.

While a prosecutor who reviewed the case opted not to launch a formal investigation into professional misconduct, the officer nevertheless risks receiving an official warning, according to a recommendation from the local chief of police.