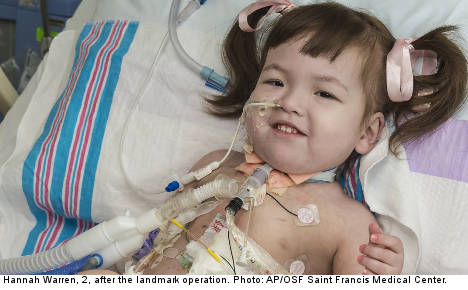 Hannah Warren has been unable to breathe, drink, eat or swallow on her own since she was born in South Korea in 2010. She has spent her entire life in hospital in Seoul, where doctors warned her parents that she would not survive for long.

On April 9th, Hannah underwent a nine-hour landmark surgery at the Children’s Hospital of Illinois in Peoria, United States. By the end of it she had received a new windpipe made from stem cells that came from her own bone marrow.

The stem cells were extracted with a special needle inserted into Hannah’s hip bone. They were seeded in a lab onto a plastic scaffold, where it took less than a week for them to multiply and create a new windpipe.

Professor Paolo Macchiarini of the Ear, Nose and Throat division at Stockholm’s Karolinska Institute performed the ground breaking procedure together with a paediatric surgeon from the Children’s Hospital of Illinois who had met Hannah’s family while on a business trip to South Korea. The parents had contacted him after hearing about Macchiarini’s transplant technique.

At a press conference at the OSF Saint Francis Medical Center, which is part of the Children’s Hospital of Illinois, Macchiarini said: “I cannot express in words what this means to me as a researcher, man and father.”

Macchiarini thanked the Catholic hospital for making the transplant possible. The religious factor is controversial considering the heated debate around stem cell research in the United States. A spokesperson for the hospital pointed out that, in this case, the stem cells were not taken from an embryo, but from the patient herself.

“This has opened up a whole new era with new possibilities to help children born with defects,” said Mark Holterman, the American surgeon who assisted Macchiarini during Hannah’s surgery.

Hannah was born with an unusual condition which prevented her windpipe from developing. Only about one in 50,000 children worldwide are born with the windpipe defect. Without the transplant Hannah would have died.

Macchiarini has been involved in five previous windpipe operations using patients’ own stem cells and nine using scaffolds made from cadaver windpipes, including one in a 10-year-old British boy. Hannah is the youngest patient ever to undergo the procedure.

Since there is no donor involved there is a minimal risk of the girl’s immune system rejecting the transplant, according to Macchiarini.

According to Holterman the initial plan was for the surgery to be performed in Sweden, but the Karolinska Institute did not have sufficient funds.

Hannah will probably need to receive a new windpipe implant within five years. She still cannot talk but her doctors are optimistic and her parents, Darryl och Young-Mi Warren, were overwhelmed after the surgery.

At the press conference, they said: “We are so blessed that Hannah received this opportunity. She only had one chance and now she is here with us.”

During the first 2.5 years of Hannah’s life, her parents could only visit her an hour per day at the intensive care unit in Seoul where she was attached to life support machines since birth.

Hannah, who has a four-year-old sister, is expected to travel back home within just a few months. Doctors believe she will be able to lead a normal, healthy life.