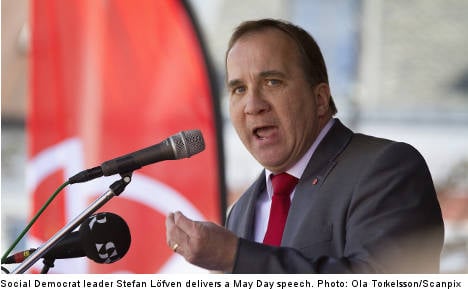 Around 800 people gathered to listen to Löfven’s May Day speech in the student town Lund on Wednesday. The Social Democrat leader mainly focused on young people in his address.

“We will ensure that every young person gets a chance. We will eradicate youth unemployment,” Löfven promised.

“We will free everyone from Phase 3, young and old”, Löfven told the crowds at the Social Democrat rally.

Phase 3 (Fas 3) is the third part of the jobs and development guarantee policy which the current centre-right government introduced in 2007. Through this scheme, companies are paid by the state to assign tasks to long-term unemployed people.

In his speech at the Social Democrat party congress in Gothenburg in April, Löfven dubbed the much-debated Phase 3 programme a “mock solution” to unemployment and said he would liberate the 30,000 Swedes currently enrolled in such initiatives.

On May Day, Löfven also brought up the Social Democrats’ new goal: ensuring that Sweden has the lowest unemployment rate in the EU by 2020.

He admitted that this is a big challenge and added: “But we have a very large tool box. Every young person who is unemployed should study or work instead,” he said, referring to the Social Democrats’ proposal to give all young people who become unemployed internship positions, jobs or training opportunities within 90 days.

Löfven also said investments are needed in schools and in the areas of industry- and innovation. He received applause when he attacked the government’s policy of offering tax deduction for parents who arrange home tuition for their children.

“Home tuition should be offered according to need, not according the ability to pay,” he said.

Löfven ended his speech by accusing the government of inaction.

“The conservative government rules according to the mantra ‘It doesn’t work, we can’t afford it, it’s not possible’. But we know about the possibilities of democracy. We ourselves determine our future,” said Löfven.