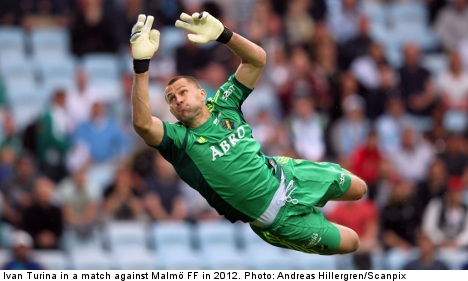 Turina, a Croatian national who came to play in Sweden in 2010, was found dead in his apartment in Solna, northern Stockholm.

“I can confirm that Ivan Turina is dead but there are no suspicions of crime,” Patrik Nuss of the Västerort police told the Aftonbladet newspaper.

Björn Wesström, the team’s acting sports director, confirmed that the death was related to a heart failure.

“Ivan’s heart stopped during the night. Unfortunately, the doctors couldn’t get it going again. It’s just so terrrible,” he told the Expressen newspaper.

“We’ll talk to the players this morning,” he added.

AIK’s chairman Johan Segui was too shocked for words on Thursday morning when he visited the goalkeeper’s Solna home to lend support to Turina’s family.

“I’m too taken aback to say anything about this just now,” he told the paper.

Turina began his career in Croatia, playing for Dynamo Zagreb. He also played in Poland for Lech Poznan. The 197-centimetre goalkeeper had signed a 3.5-year contract with the Stockholm club.

Turina is survived by his girlfriend and their two twins.