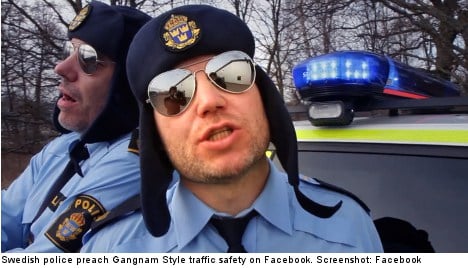 “The idea was to promote traffic safety in a fun way and maybe attract a few visitors to our Facebook page,” Mikael Nykänen of the Höör police told the Expressen newspaper.

Colleagues of Nykänen, who heads the police station in the rather sleepy community of about 8,000 residents in southern Sweden, teamed up with counterparts from neighbouring stations in Eslöv and Hörby to produce a traffic safety film inspired by South Korean pop artist Psy’s 2012 megahit.

While hype surrounding the original Gangnam Style video, which has garnered more than one billion views on YouTube, may have passed its peak, that didn’t stop this rag-tag band of Swedish officers from riding the K-pop wave with their own version of the song, Kör i säker style (‘Driving safely style’).

“This is our challenge and appeal to you that you should drive safely so that you arrive safely,” read the description accompanying the video when it was posted on Wednesday to the official Facebook page of the police force of Ringsjöbygden, the collective name for the three town’s police operations.

Apparently, Swedes got the message, with the short video being shared more than 26,000 times and garnering nearly 30,000 shares in less than a day of being posted by Joel & Jonas the two officers behind the video who so far wish to be known only by their first names.

“We thought a lot of people would see it, but not this many,” Nykänen told Expressen.

While some of the 2,500 commenters voiced criticism over the film, alleging that it came too late and that the officers’ time should be spent fighting crime rather than dancing in front of a camera, Nykänen insisted reaction to the video has been overwhelmingly positive.

He added that it was shot and produced outside of official working hours.

Speaking with the Skånska Dagbladet newspaper, local police chief Patrik Isacsson explained that the idea for the video was hatched several months ago when the Facebook page of the Ringsjöbygden police was launched.

Isacsson signed off on the production, allowing the officers behind the film to use official police uniforms and vehicles, and saw the finished product just before it was posted, calling it “professional with good content”.

He added that he and his colleagues are still feeling their way forward with social media, having joined the ranks of several other local police precincts that have taken to Facebook and Twitter to engage with the public.

“Things don’t always have to be so formal; sometimes it’s okay to be a bit light-hearted,” he told the newspaper.

Meanwhile Nykänen, who didn’t appear in the video posted on Wednesday, hinted that the Gangnam Style-inspired video may not be the last one produced by the Ringsjöbygden police video production duo of Joel & Jonas.

“It seems like they’re planning something. They wanted to wait and see what happened with this one, but now when things have gone so well, there will probably something similar,” he told Expressen.

We’ll be sure the law is followed, we’ll let honesty surround you

Whatever car you may be driving

Be clear in what you do

Drive at legal speeds, be nice to others, and leave enough distance to one another