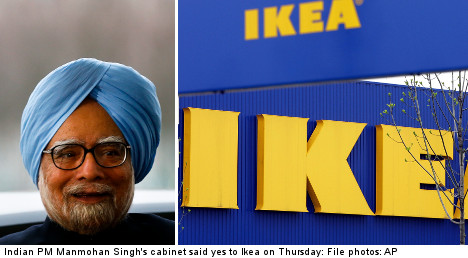 Ikea’s plan to invest in India was approved in a cabinet meeting headed by Prime Minister Manmohan Singh, according to officials.

The Swedish firm, which submitted its application last June, hopes to open 25 stores in India through a 100-percent owned unit called Ingka Holding. It comes as part of a wider push into emerging markets such as China and Russia.

“The Cabinet Committee on Economic Affairs today gave its approval to the proposal of Ingka Holding as recommended by the Foreign Investment Promotion Board (FIPB),” a government statement said.

“The approval would result in foreign direct investment inflows amounting to 105 billion rupees ($1.95 billion) approximately into the country,” it added.

Ikea’s entry into India is being closely watched as a test case for how a large foreign corporation might negotiate India’s notorious red tape.

Ikea in a statement described the cabinet decision as a “big step in our journey to open Ikea stores in India”, according to the Press Trust of India.

“We feel very confident that the people of India will love to visit and to shop at Ikea,” the company’s Indian chief executive officer Juvencio Maeztu said in the statement after the government’s final nod.

The FIPB gave the plan the green light in January, two months after it had rejected 15 of Ikea’s 30 product lines, including food and textiles.

It was not clear on Thursday whether the original FIPB limitations on food and products remained in place as part of the new deal.

Ikea had previously told New Delhi the company must be allowed to retain its “global model” in India, retailing all of its products and running its in-store restaurants as it does in every country in which it operates.

The new deal comes after Ikea scrapped plans to enter the market in 2009 due to regulatory concerns.

Singh’s government announced a string of pro-market and investor-friendly reforms that relaxed or removed barriers to foreign retailers in September 2012.