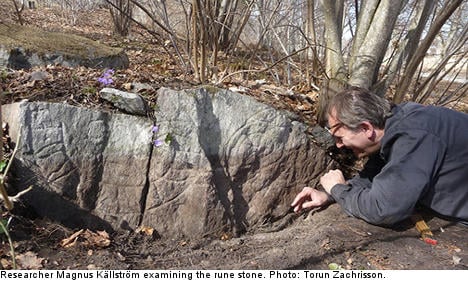 “It’s a very intriguing find, it shows that there is so much history yet to discover,” researcher Magnus Källström from the Swedish National Heritage Board (Riksantikvarieämbetet) told The Local in reference to the 1,000-year-old stone.

The find took place last week while archaeologist Torun Zachrisson and a group of students from Stockholm University were on an excursion in hopes of finding a rune stone known as U 170.

According to Zachrisson the stone has “been missing” for 300 years, but was rumoured to be near Bogesund’s brygga, a jetty just outside of the archipelago town that lies an hour east of the capital city.

The students were on their way back to university when they happened on the stone, most of it buried underground.

“On the last stop of the day on the excursion with the students, the sun was shining in the right direction and suddenly it was there at the edge of the burial ground,” Zachrisson said in a statement.

The find was only a part of the bigger rune stone that was erected around the year 1060.

Fortunately for Zachrisson and her team, a Swedish historian had previously drawn a picture of the entire stone, along with its carvings, which meant current researchers could translate the whole text.

“Gunne and Åsa had this stone and arch erected for Önd, their son. He died on Ekerö. He is buried in the graveyard. Fastulv inscribed the runes. Gunne erected this stone slab,” the runic characters on the stone read.

According to Källström, the text is of particular interest because it confirms the existence of a church on Ekerö, an island in Lake Mälären just west of Stockholm.

“Churches were rather uncommon in Sweden at that time. We hadn’t had time to build that many yet,” he said.

“The text is also the first time the name Ekerö is mentioned in a historic context.”

Källström was confident the rediscovery of the stone would help expand researchers’ understanding of how people lived at the time. However, he was not very hopeful about the chances of finding the missing pieces of the stone.

“There are rumours about where the rest of the stone could be, however it’s probably been used in construction, perhaps in the building of the Vaxholm castle,” he told the Local.

“Now I’m just really excited about conducting more research and eventually restoring the stone by painting the runes back on it.”