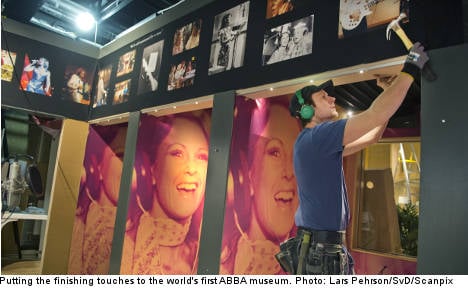 Abba fans have been eagerly awaiting the opening, with many sharing their excitement on the museum’s Facebook page.

“I’ll be there,” vowed Bea Schroeer of Berlin, while Alexander Kossovsky of Saint Petersburg wrote: “Can’t wait to go!! Hurray! After all this time!!”

In Stockholm, rental bikes and cars brandishing the museum’s logo have been criss-crossing the city for weeks. Ads have been running in newspapers and on television, and some of the band’s costumes are even on display at Stockholm’s Arlanda airport arrivals hall to promote the capital’s newest cultural

At Abba – The Museum – a wink to the title of the 1977 film Abba – The Movie – visitors can pretend to be the fifth member of the band, appearing on stage with the quartet and recording a song with them thanks to a computer simulation.

Another room dedicated to the song Ring, Ring features a 1970s telephone, to which only four people have the phone number: Abba members Agnetha Fältskog, Anni-Frid (Frida) Lyngstad, Benny Andersson and Björn Ulvaeus. They are expected to occasionally call to speak live with museum visitors.

The group dominated the 1970s disco scene with their glitzy costumes, kitsch dance routines and catchy melodies such as Voulez Vous, Dancing Queen and Waterloo, the song that won the 1974 Eurovision Song Contest and thrust the band on to the international scene.

Abba have sold some 378 million albums worldwide, outdone only by Elvis Presley and the Beatles. Their popularity has continued to grow over the years, with the 1999 hit musical Mamma Mia and the 2008 film of the same name starring Meryl Streep bringing their music to a whole new generation of fans.

Abba aficionados are not expected to tour the museum to hear the band’s songs, which most of them know by heart, though there will of course be plenty of music on offer.

Rather, the focus will be on letting visitors ‘experience how the Abba members’ lived their lives’, museum curator Ingmarie Halling, who was the band’s stylist from 1976 to 1980, told AFP in a recent interview.

The four members will recount their stories in the museum’s audio guide. All the band members participated in the creation of the museum, donating items and working closely with Halling.

Ulvaeus, 68, has been the most active, serving as financial guarantor for the project and as chairman of the board. “I had my doubts about becoming a museum relic before my death… but now I understand that… together we created a lot,” he told reporters in October when plans for the museum were revealed.

In an interview with Kupe magazine in May, he added: “I said to myself: why not? Who is better placed to make this come true, if not me!”

On Monday, the museum will be unveiled to the press and officially opened by Ulvaeus, Lyngstad and Andersson – or Björn, Frida and Benny, as they’re better known. The doors will open to the public from Tuesday. Agnetha Fältskog recently told Sveriges Television (SVT) that she will be in London promoting her latest solo album and will not attend the opening.

Abba last appeared on stage in 1982, and split a year later. While they have appeared in public together on rare occasions, they have never reunited to perform as a group, and have vowed that won’t ever happen.

The museum will feature five floors of band memorabilia, including costumes, instruments, gold records and recreations of their recording studios and dressing rooms.

The state-of-the-art museum, located on Stockholm’s leafy island of Djurgården, will be cashless, requiring visitors to pay for purchases by credit or debit card.

“Money, Money, Money is what the headlines are going to read,” joked Ulvaeus in an interview with the tabloid Aftonbladet, citing the title of one of the band’s biggest hits.

The museum says it expects to attract a quarter of a million visitors in 2013, who it hopes will “walk in and dance out”.