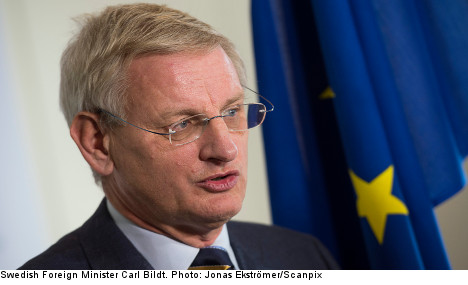 Experts in Sweden are up in arms over Bildt’s failure to back a recent nuclear weapons anti-proliferation proposal presented at a recent UN conference.

Delegates at the conference, held in Geneva in April to discuss the UN-backed Non-Proliferation of Nuclear Weapons Treaty (NPT), proposed to rewrite the anti-proliferation text by saying nuclear weapons should be banned for humanitarian reasons.

The proposal was well-received by most countries at the conference, with Sveriges Radio (SR) reporting that 78 of the almost 100 nations represented decided to throw their weight behind the amended text.

The detractors, meanwhile, included several countries that possess nuclear weapons themselves, as well as Sweden, which doesn’t have a nuclear arsenal.

Swedish politicians and proliferation experts have reacted angrily to Bildt’s decision not to back the proposal.

Liberal Party (Folkpartiet) foreign affairs spokesman Christer Winbäck told SR that the foreign minister’s move could hurt Sweden’s credibility in attempts by the international community to reduce the number of nuclear weapons in the world.

“I’m surprised, there have been previous statements that the consequences for using nuclear weapons are indeed devastating from a humanitarian point of view,” he said.

“I think there is a risk Sweden’s voice could be toned down in the eyes of other countries if we refuse to sign papers confirming the dangers of nuclear weapons.”

In the days leading up to the conference, Sweden announced it was leaving the New Agenda Coalition (NAC), a coalition working for nuclear disarmament that Sweden founded in the 1990s along with Brazil, Egypt, Ireland, Mexico, New Zealand, and South Africa.

The contrast led Josefin Lind at Swedish Physicians for the Prevention of Nuclear War (Svenska läkare mot kärnvapen) to claim the government was not prioritizing the nuclear weapons question.

“The fact that Sweden hasn’t recently initiated any projects seeking to prohibit the use of nuclear weapons clearly indicates that the government is interested in other things,” she told SR.

Bildt, meanwhile, has hit back by saying his no vote was a non-issue, blown out of proportion by SR.

The minister even made the unusual move of phoning radio call-in programme “Ring P1”, a radio equivalent to a newspaper’s “letters to the editor” section, allowing concerned citizens of all stripes to call in and air their opinions about whatever is on their mind.

After host Alexandra Pascalidou first took to Twitter to ask why Bildt refused to sign on to the agreement, the foreign minister tweeted back “I’m calling!” in an attempt to clarify the issue.

“We undertake quite a lot of serious work when it comes to nuclear disarmament, including treaties on nuclear tests and getting those treaties signed.”

“That specific proposal was a side issue that no serious countries were engaged in,” Bildt added.

“We should take our disarmament work seriously and try to get done what can be done.”

Bildt’s move angered SR news chief Anne Lagercrantz, who accused the minister of trying to avoid facing questions from journalists by instead taking to the airwaves on a call-in programme.

“This is one of several independent incidents on the same topic where he’s avoided talking to the most informed reporters, and that’s a worrisome development,” she told the Expressen newspaper.