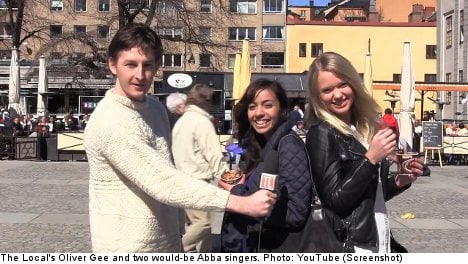 The world loves Abba. The Swedish super group has sold more albums than anyone else on the planet (besides Elvis and The Beatles of course). Fans from as far as Japan and Argentina travelled to Stockholm to be here when the Abba museum opens its doors on Tuesday, and are content to stand in long queues out the front in the hope of catching a glimpse of the awesome foursome.

But what do Swedes think about the band that came to define Sweden? Are they embarrassed by the band-cum-brand. Or are they proud that Sweden got thrust onto the world’s stage, no matter the reason?

Perhaps best qualified to answer this question are the band members themselves, so when I headed to the preview opening of the museum on Monday I made sure to ask them.

Björn Ulvaeus was on hand to answer.

“We are kind of more ordinary, us Swedish people, I think,” he told The Local.

“Foreign journalists ask me ‘Can you walk around in the streets?’ Well in Stockholm you can, yes. They look at you, they recognize you, but they don’t bother you.”

In fact, there is no limelight in Stockholm as far as Ulvaeus is concerned.

“In the Abba heydays, Agnetha and I used to walk around in the local supermarket with a trolley – me in my clogs – and we wouldn’t be bothered,” he added.

Despite not appearing to care, do the Swedes actually love the band like the rest of the world?

“I think, nevertheless, that people probably like us here as well,” he answered.

Something of an evasive answer from the superstar Swede, I thought. But what about the average Swede on the street? What would they have to say about Abba? And would any of them sing a few notes of an Abba song if I asked them very politely?

My my… there’s only one way to find out.