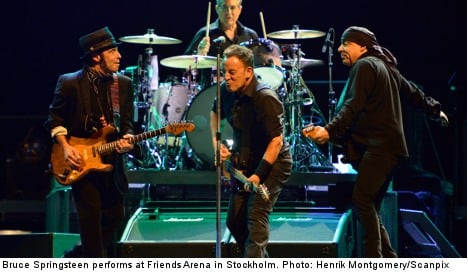 The reason why Springsteen was so intensely welcomed in Sweden last weekend is because the current Social Democrat leadership no longer stands up for his ideals.

What’s up with Bruce Springsteen? What about him has made him into such an icon among Sweden’s social democrats [adherents of social democracy, though not necessarily the Social Democratic Party]?

The easy answer, of course, is that his tributes to the common people and their travails, to work, combined with his social critique, make him what a social democrat would look like if you replanted him or her in American soil.

And don’t forget that Springsteen’s loving critique of the US corresponds with what social democrats traditionally have given voice to when it comes to their feelings towards the United States.

He is, in other words, an interpreter. Springsteen is a link between Swedish social democracy and American radicalism. The link has at times been frayed by political conflicts but overall, since time immemorial, it’s been built on respect and admiration – at times, it went both ways.

A more emotional explanation for why Springsteen is so popular among social democrats is that they are compensating for several decades of isolation from music’s main currents. Social democrats were long dependendent on the Swedish radio music programmes Svensktoppen and Melodikrysset.

As listeners, they thought themselves above Melodifestivalen, when Swedes chose their entry to the Eurovision song contest. But they were also skinned alive by the critique of them found in progressive music.

For some reason or other, the Swedish labour movement let Bob Dylan slip by unnoticed. Modern pop icons like Madonna may have been both radical and innovative, but she was far too provocative to fit a movement that in essence is politically correct and bordering on prude. That’s why the Rolling Stones’ Street Fighting Man didn’t fit; but why didn’t they adopt the Beatles’ Revolution?

What about the Swedish singer Ulf Lundell? Radical, sure, but too flaky and individualistic. His repertoire may have a few solid radical top hits, but Lundell didn’t seem to be good enough for social democracy.

Maybe it’s partly a coincidence that Bruce Springsteen had to act as a security blanket for a movement that felt abandoned by the present. Springsteen became the progressive papa that the social democrats never had, the rock star they never dared embrace.

One reason that he became so loved by social democrats is that Springsteen, just like the Social Democratic Party itself, is a mix of radicalism and traditionalism.

Many a biography has analyzed Springsteen. There is Louis P. Masur’s Runaway Dream. Born to run and Bruce Springsteen’s American Vision and Peter Ames Carlin’s Bruce.

Masur describes how, during his school years, Springsteen was plagued by his Catholic teachers, which lead him to develop a very strong opposition to religion. That’s an interesting observation today when people are again discussing his religiosity and asking if his texts and his church visits testify to a return to the roots he hacked off in his youth.

That would, in that case, correspond with the development of social democracy. The movement was born in soil prepared by the surge of free churches in Sweden, but later became critical of religion and atheist. Today, however, we again see a spiritual yearning and flirtations with religious movements within social democracy. In the best case scenario, this is a synthesis of the party’s attitude to the metaphysical and to pragmatic every-day politics.

The social democrats recognize themselves in Springsteen’s attempts to balance a political commitment to making the world better, with that world being both consumerist and ignorant, a world where ‘they hate you if you’re clever and they despise a fool’. The law of Jante (Jantelagen) – which stigmatizes people who stick out or brag – is not actually a Swedish or even a Scandinavian phenomenon, it’s an international one.

What Springsteen manages to do with flying colours is to cozy up to today’s world, but still question where we are heading. That pretty much sums up what Swedish social democrats feel – they want to embrace the present (if for no other reason than electoral strategy), but still not have to lower their wagging finger when modern tendencies go too far.

Yet another serious attempt to understand Springsteen comes in the shape of an anthology, Bruce Springsteen and Philosophy: Darkness and the Edge of Truth. One essay calls him a ”Socratic revolutionary”, because he keeps up the dialogue with his audience. He doesn’t teach. He doesn’t entertain. He is instead doing what we today might label ”discoursive democracy”, or what we in Sweden used simply to call folkbildning – the people’s attempts to educate themselves through debate. In short, Springsteen has formed a sort of rock-based study group.

That type of initiative lies at the very heart of social democracy.

The argument in the anthology is that Springsteen mixes self-analysis and insight about how capitalism coopts him with the classical American message about freedom. Such a mix may seem absurd in Sweden, because negative freedom (as defined by Isaiah Berlin) is a concept that capitalists in Sweden have embraced, while Sweden’s left has always propagated positive freedom – that true freedom can only come about if everyone goes to a public school and does the same hobbies in the afternoons.

Yet perhaps social democrats in general could embrace such an ideological mix – jobs for all, sure, but why not a Cadillac and a job for all. Or perhaps a Volvo and full employment. A salary you can live on and employment insurance that means you can support yourself if you find yourself out of work. But also, a moment in front of the TV and a nice walk down to the river.

But the Social Democrats don’t dare stand up for that anymore. So Bruce has to step in and do it instead.

Stig-Björn Ljunggren is a political scientist and member of the Social Democratic Party. And he prefers the Rolling Stones.

The original version of this article was published in Swedish SVT Debatt, the opinion section of the website of the Sveriges Television website.