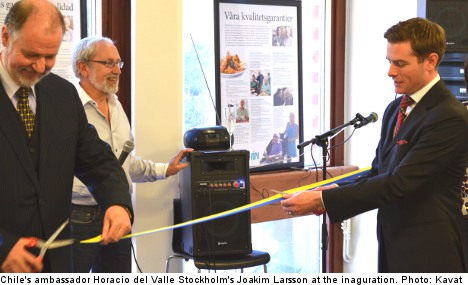 Nadia Carrizo Hellström was already organizing activities for older people who immigrated to Sweden primarily from Latin America when the private care company Kavat contacted her to set up the facility.

“It is incredibly important to give care in the person’s mother tongue so there aren’t any misunderstandings that can impair the quality of care,” Carrizo Hellström told The Local.

She said that while many of the residents had moved to Sweden more than 40 or 50 years ago, some had dementia which meant they had lost their Swedish and gone back to their mother tongue.

Carrizo Hellström added there were also emotional reasons to share a home with people from similar cultures.

“The staff and the residents share the same culture, the music, the food. Emotionally, it means so much,” she said.

Chile’s ambassador to Sweden, Horacio del Valle, attended the inauguration of the 33 apartments in the La Casa care-home in the Stockholm neighbourhood of Midsommarkransen on Tuesday. Also on hand to praise the initiative was city hall’s Joakim Larsson, who heads policy on Stockholm’s elderly community.

“I once met an older man in a wheelchair, who could only communicate by writing notes,” Larsson told The Local.

“But his health improved when he moved, he could speak his own language, and eventually, with the staff’s help of course, even got out of his chair to dance for a moment.”

While national legislation allows people in Sweden to shop around for care alternatives, LOV (Lagen om valfrihet), not all municipalities have adopted the system. Local administrators are in theory free to pay for elder-care in another municipality, yet many don’t.

“We see an ideological divide, especially where Social Democrats are in power,” Larsson said.

“It’s unfortunate, because in the end it affects the individual.”

He said the number of niche markets for the care of aging immigrants is expanding in Stockholm. Large populations of Greek, Spanish and Italian immigrants who moved to Sweden in the 1960s, for example, are approaching old age.

Some homes in the future would also need specially trained staff to help aging refugees who experienced traumas in their home countries, while religious considerations were also in some contexts key.

“The Jewish Home (Judiska hemmet) in Stockholm is a good example, where the kitchens are all kosher,” Larsson said.

He had also been in contact recently with a group of gay and lesbian elders who started a cooperative in central Stockholm so they could age together in a tolerant environment.

To spur on such specialist homes, however, Larsson said there needed to be more flexibility at the municipal level, which is responsible for paying the actual cost of care.

He said several would-be residents from across Sweden had signaled their interest in moving into a proposed home for deaf elderly in Stockholm, but that the project fell through in the end, in part because several municipalities were not prepared to pay for their residents to be cared for in another location.

Larsson said he envisioned a potential future solution in which the money paid out to care for the elderly was managed at a national, rather than municipal, level.