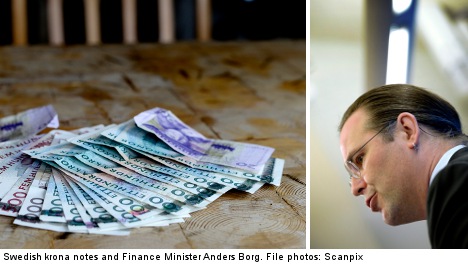 “The krona could become an issue, particularly from the central bank perspective – there are some good arguments for them to consider how to look at the krona,” Finance Minister Anders Borg told Bloomberg News on Wednesday.

“It should be based on fundamentals and obviously priced on the market, but there are also some risks you’ll see too much of an appreciation,” he added.

“That’s obviously one of the worries we have.”

Bloomberg reported that Borg’s comment sent a possible U-turn signal from last year when he vowed not to tamper with exchange rates.

Less than a month ago, Borg downplayed concerns about the effects of a strong krona when he presented the government’s spring budget bill.

The Swedish krona has climbed 6.5 percent over the past year, putting it in Bloomberg’s top-ten watch list for strengthening currencies in developed markets.

Since 2008, the krona has climbed 28 percent compared to the value of the euro, Bloomberg noted.

The strong krona has already been put in the spotlight by Stefan Ingves, head of the Swedish central bank, the Riksbank, when he said it was not helping his efforts to keep to Sweden’s inflation goal.

“We have an independent central bank that does not take cues from the government,” the Social Democrat financial spokeswoman told the TT news agency.

“I think the minister is pushing the boundaries? Does he mean that the Riksbank should listen to the government?” Andersson added.

“He should spend more time on his own turf, which is fiscal policy.”