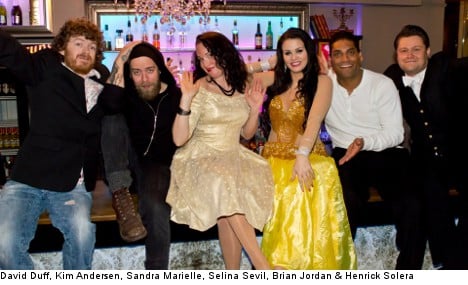 Eurovision hype is hard to avoid right now in Malmö. That is, unless you have been living under a rock for the past month.

Practically every billboard is devoted to the event. Even the statue of Sweden’s Karl X Gustav, located in the city’s Stortorget square, has been branded with a Eurovision butterfly. For some, Eurovision fever has turned into fatigue and refuge is needed.

Step forward a group of international performers who are aiming to take advantage of Malmö 2013 with an alternative Eurovision festival, of sorts. Heard the one about the American, Croatian, Swede and Irishman who walk into a burger bar? No? Well you are about to.

“There is very little on in Malmö aside from Eurovision in the week leading up to the final. Our idea is to put on something a little different,” comedian Brian Jordan tells The Local.

Jordan, who hails from Georgia (the US state, not the country), is a stand-up comedian who resided in Malmö for almost a decade. However, Eurovision and the Swedes’ slavish devotion to it has yet to rub off on the funnyman from the American south.

“Eurovision is a very strange entity I have to admit. It caught me off guard and I’m surprised by the fervour that Swedish people have for it. Even though they pretend they don’t, they do!” he quips.

While not exactly jumping on the traditional Eurovision bandwagon, Jordan and his band of merry men and women nevertheless saw an opportunity to showcase their talents to some of the 100,000 Eurovision plus fans expected to throng to Malmö.

“We are organizing a cabaret show – dubbed Eurovision Vegas Night – with music, magic, comedy and even a bit of belly dancing,” Jordan explains, adding the format is “something of a rarity” in Sweden’s third largest city.

The show will run nightly from May 13th to 16th, and whilst the entertainers are happy to provide some respite from Eurovision mania, they’ve learned there’s no point in competing for views on the night of the actual Eurovision finale.

“On the nights of Melodifestivalen [Sweden’s national Eurovision qualifying contest] we’ve often had to cancel gigs as nobody shows up. The streets are practically deserted,” Irish comedian David Duff reflects on learning the hard way about Swedes’ commitment to Eurovision.

Not surprisingly, poking fun at their Swedish hosts is a given for the comedy duo for whom stand-up is strictly a hobby. Jordan has a regular day job while Duff is a student.

“Swedes love it when you have a go at them on stage. They have a similar sense of humour to the Irish. It must have something to do with the long dark winters,” adds Duff while Jordan says that “sarcasm doesn’t really translate into Swedish.”

Singer Sandra Marielle, who is half Swedish/half Croatian, will perform classic songs and, rumour has it, may have a crack at crooning the odd Eurovision number.

“If you grow up in Sweden then the Eurovision is among the highlights of the year. It used to be about keeping peace in Europe but now the contest is really a way for record companies just to promote artists,” she explains.

“We’re going to mix things around using the songs we loved growing up along with some jazz.”

But the comics’ Vegas-themed Eurovision cabaret show isn’t the only event designed to offer audiences in Malmö an alternative to remaining clues to the 2013 Eurovision finals.

Across town, at the Moriska Paviljongen venue in Folkets Park, organizers will be cueing up the worst of Eurovision with a ‘Null points’ night. Among songs likely to be resurrected for the show will be Sweden’s ‘En gång i Stockholm, which failed to trouble the scoreboard in 1967, as well as any of Norway’s record four null pointers.

“We are paying tribute to these marvellous songs with a sing-a-long evening, where the songs get all the love and appreciation they deserve,” a spokesperson for Moriska explains.

The event is part of Moriska’s Euro Fan Café programme, which runs from May 6th through 18th, that it hopes “both diehard fans and the curious public will find interesting”.

“We aim for this to be a venue created by fans and for fans, so your stay in Malmö will be filled with all the special Eurovision events that you want and deserve,” Malmö-based producer Albin Balthasar, who organized the programme, said in a statement.

While Tickets for the actual Eurovision finale have long since sold out, with black market ones swapping hands for hugely inflated prices, fans can nevertheless enjoy an alternative Eurovision experience in Malmö free of charge, Jordan adds.

“If you don’t like it, then pay nothing,” he says of the cabaret show.

“There isn’t any cover charge, but anyone who comes is certainly welcome to make a contribution in our tips bucket!”