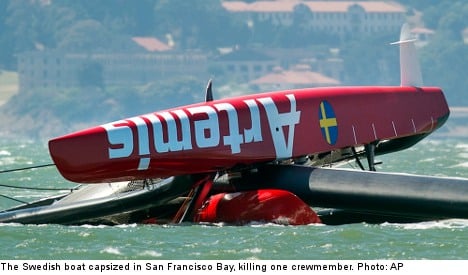 Simpson – who won Olympic gold in 2008 and silver in 2012 in the keelboat star class – was trapped under the Artemis Racing boat for about 10 minutes, according to a statement on the America’s Cup website.

“It is with immense sadness that Artemis Racing confirms the tragic death of crewmember Andrew ‘Bart’ Simpson today in San Francisco,” the team said in a statement.

“Despite attempts to revive him, by doctors afloat and subsequently ashore, his life was lost,” it said.

“Our heartfelt condolences are with Andrew’s wife and family.”

“Our dispatch center was notified… that an Artemis boat had capsized and one person was reportedly in the water 10 or 15 minutes. One of the chase boats pulled the gentleman out of the water and began CPR,” Talmadge told AFP.

A second crew member suffered injuries not thought to be life threatening, she said. Twelve people were on the boat when it capsized and all have been accounted for.

The yacht involved is a AC72 catamaran, the Swedish team’s first, according to the online statement, which said the incident occurred between 12.30pm and 1pm local time.

The AC72 boats in the America’s Cup were described by event organizers as “speedsters” powered by 130-foot (39.6-meter) tall wing sails and with the ability to hydrofoil — essentially rise out of the water to reduce drag.

They can reach top speeds in excess of twice the windspeed, and place strenuous physical demands on crew members.

The catamarans have been adopted for the venerable yachting competition this year in a bid to make the event more exciting.

The Oracle syndicate, owned by software billionaire Larry Ellison, defeated Switzerland’s Alinghi in a trimaran to win the last edition of the America’s Cup in 2010.

Ellison pushed for the switch to the catamarans as part of an effort to make the event more television-friendly.

The Louis Vuitton Cup to decide a challenger will be held July 4th through September 1st. The winner will take on Oracle Racing for the America’s Cup from September 7th-22nd.

Oracle Racing’s AC72 capsized in spectacular fashion in October on San Francisco Bay, but no one was injured.

Talmadge said she did not know what sequence of events led to the Artemis Racing craft’s capsizing.

The Artemis team was aware of the challenges and dangers as they planned their preparations for the competition, and hoped to give their crew members adequate opportunity to learn to handle the AC72.

“Before performance, there is the safety of our team,” Cayard said when they launched their boat in Spain last year.

“San Francisco Bay in July and August is an unforgiving place.”