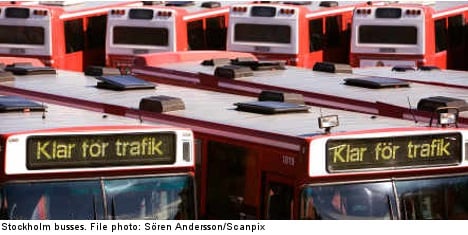 The 19-year-old girl had fallen asleep on the bus to Tyresö in southern Stockholm following a night out and discovered after alighting that she had been robbed.

“You just wouldn’t expect a bus driver to do this,” the girl said to the Dagens Nyheter daily.

The images show how the driver takes the teenager’s mobile phone, empties her purse and then wakes her up and helps her off the bus.

He then sits down in the driver’s seat and proceeds to count his take.

The girl’s mother called the bus company, telling them that her daughter had probably been drunk and carelessly mislaid her things. The police meanwhile informed the family the same day that the investigation had been closed.

But after persistence from the girl’s mother, an inspector at Nacka police requested the surveillance film from the bus company and was thus able to solve the case within a matter of days.

During a search of the bus driver’s home the police found more computers and mobile phones, prompting suspicions that the man had developed a system of thieving.

The man was on Friday sentenced to probation and ordered to complete community service.

The bus driver was immediately fired after the story of the theft was discovered.

“After the service contractor (bus company) looked at surveillance film of the theft the decision was made to dismiss this driver immediately. So he has not been driving buses since,” said Johan Nordgren at Stockholm transport operator SL.

The man was employed by a bus company that runs the bus services on behalf of SL.

The driver had no previous criminal record, according to Johan Nordgren.

“When employing drivers it is routine to search the criminal records register. But I understand that this person had no prior record and so you can slip through the checks, he said.

Johan Nordgren underlined that he was unaware of any previous cases where drivers steal from their passengers.

“It just should not happen. It’s really important that you feel comfortable on SL services,” he said.