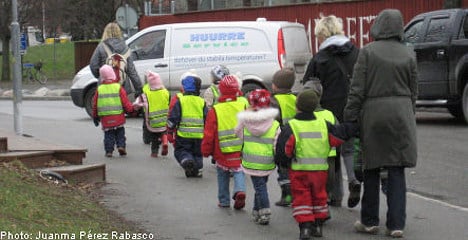 “More children have the right to attend daycare than previously. Even the children to those who are unemployed or on parental leave have the right to go to daycare at least 15 hours per week,” said Åsa Nordström at the agency to the Dagens Nyheter daily.

While the numbers of children attending daycare has increased across all age groups, the greatest increase is among one-year-olds.

Nordström told the newspaper that ”most children go to daycare, it’s become part of the educational system”.

Anders Broberg, a professor of clinical psychology with a focus on children at the University of Gothenburg, warns that the increasing pressure on daycare facilities over the past 10-15 years has generally resulted in significantly larger groups and fewer adults per child.

This situation, he argued, can create stress and anxiety in children.

“I am quite concerned about how daycare for the youngest children looks like.The most important thing for very young children is that they feel safe,” he said.

“Security is about close relationships, with parents or with daycare staff. But due to the developments many daycares have been unable to provide this security that young children need.

Broberg pointed out that in the 1980s groups of small children in daycare would number around 12 with three adults, but in 2013 the figure is more likely to be 17-20 children.

“Unfortunately the research that we and others did in the 1980s, which showed that young children are not harmed by being in daycare, is used as evidence that all is well today too. Although the situation looks completely different.”

“The sign of the times is that both parents are working full time while society is responsible for providing a sound environment for growth, even for the youngest children. But, in my opinion, society does not live up to that commitment.”

Broberg warned of the “unnecessary stresses for the children” and warned that we will only find out the results of the situation in 20 years time.