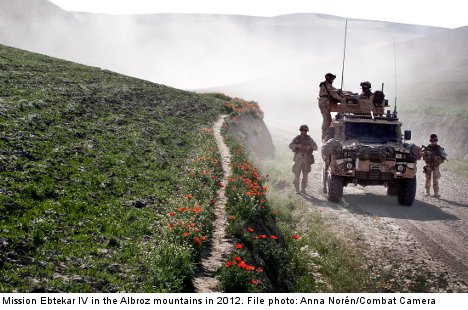 “We have talked about keeping a maximum of 200 military staff to participate in education initiatives and other activities that aren’t combat related,” Bildt told the Dagens Nyheter (DN) newspaper.

The centre-right Alliance coalition government that Bildt represents is set to meet with the Green Party and the Social Democrats next week to discuss the future of Sweden’s presence in the central Asian nation.

At present, there are 569 military personnel in Afghanistan partaking in the US-led, UN-approved Isaf mission, with Swedish efforts centred around its base in Mazar-e-Sharif.

Bildt added that any details of what Sweden would do if its military staff stayed on depended in large part on negotiations between the US and the Afghan government.

“It has taken a very long time for the Americans to define what they are going to do,” he said.

Green Party spokeswoman for foreign affairs, Bodil Ceballos, said that during her December visit to Nato headquarters it became clear that Sweden was the only country alongside Germany discussing whether to stay.

“It makes me ask why we should be the ones to stay,” she told DN.

Bildt, while elusive on specific goals for a potential future mission, said his main worry for Afghanistan was whether democracy would prevail. He also said that Afghan troops could desert when recruited by local warlords.

“That’s a much more dangerous scenario than the Taliban (threat),” Bildt said.

“The risk is that the Afghan state is ripped apart and won’t be able to transition to democracy. This is a country that more or less completely lacks a democratic tradition.”

Presidential elections in Afghanistan are set for the spring of 2014.

Sweden has a long history of participating in multinational military efforts. Swedish troops patrol the line of control in Kashmir, partake in anti-pirate efforts off the Horn of Africa, and are engaged in peace-keeping in Kosovo, among other engagements.